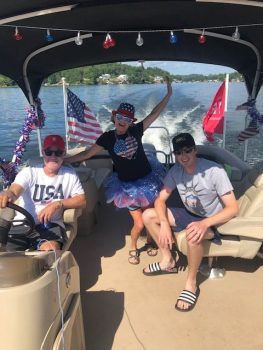 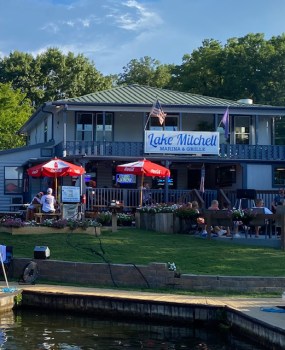 The Lake Mitchell Marina & Grille was a popular spot during the Fourth of July weekend. (FRANK HARVEL | CONTRIBUTED) 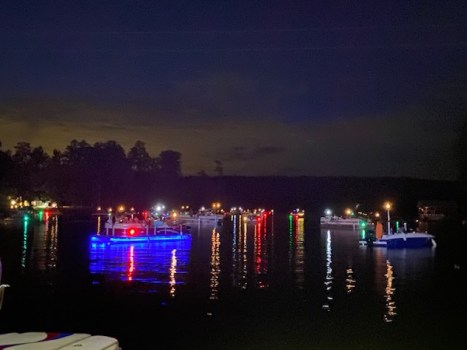 Some of the fireworks that were shot over Lake Mitchell. (RUSTY WEBB | CONTRIBUTED)

We should not take our independence lightly. The Fourth of July is celebrated big time on Lake Mitchell but we hope people remember the reason for the celebration. Our freedom to celebrate was paid with a price. Freedom isn’t free at all. Many gave their time in service and even in death that we might be able to shout “Happy Fourth” around the USA. It was heard loud and clear here on Lake Mitchell during the boat parades and during the many fireworks displays.

Lake Mitchell Marina and Grille got involved this year with great food and entertainment. Many people have stepped up to make it a fun celebration here on Lake Mitchell. The boat parade gets longer each year.  The people decorate their boats, themselves and even their pets. The USA flag is always flying the highest. This year there were three parades instead of the usual two. The pontoon parade started at 10 a.m. at Higgins Ferry and went south. The new parade of personal water crafts also left Higgins Ferry at 12 p.m. and proceeded south at a faster than lightning speed. That’s why I missed it. I had gone up to start the grill and heard them and before I could make it down to the dock for pictures they were past me. I did watch from above and there were a lot of participants.

The speed boat parade left Blue Creek Marina and headed north at 2:00 p.m. They are fast too and make lots of waves. The gang at my pier always grabs a float or tube and jumps in the water for the ocean like waves. Those on docks around the lake enjoy the parades and cheer and yell as they pass by. Many of the pontoon boat parade people have started tossing candy, balls and toys out for the spectators along the shoreline and on docks. The folks in one boat were tossing rubber ducks this year and the kids enjoyed swimming and collecting those that did make it to the dock when tossed. There were balls and candy floating everywhere.  The 15 teens at my pier were eager to jump in and compete with who could retrieve the most bounty, and nothing was wasted.  The younger children were delighted with all the treasures especially the rubber ducks.

The fireworks sponsored by the Home Owners Boat Owners of Lake Mitchell just gets bigger and better each year. There are a few smaller groups starting to have fireworks in other locations around the lake. There was some kind of fireworks or entertainment each day or night of the long weekend. We are blessed to be able to celebrate on such a beautiful lake.