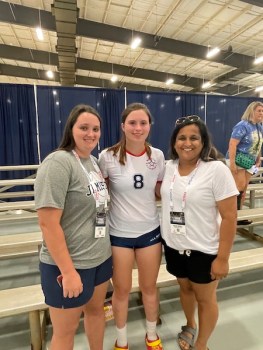 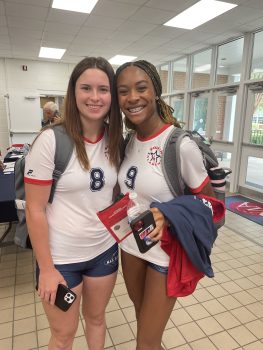 Jemison High School’s Kinsley Martin competed in the 2022 AHSAA North-South All-Star volleyball game on July 22 at the Multiplex at Cramton Bowl in Montgomery.

Martin was one of 32 high school volleyball players to be selected to play in the game.

Martin was a member of the South team that fell 3-2 to the North squad in the match. The North team won the first two games 25-20 and 25-18, respectively. Martin and the South team responded by winning game three 25-21 and game four 25-23 to force a fifth and deciding game.

“It was an honor to be chosen to play on the South team,” Martin said. “I enjoyed the experience of meeting and playing with all the girls from different parts of the state. Also, making new friends is always good.”

“I was very proud of her,” Baswell said. “To have someone like her represent our school and program is a huge deal. Only 32 girls in the state get to compete in it so someone from Jemison High School getting to go is an amazing opportunity. I think she represented our school very well.”

Martin said she hopes she can take this experience and use it going forward into her senior year at Jemison.

“I hope it makes me a better player and teammate,” Martin said. “We have a lot of talent on our team this year and I think this will be the best year ever for Panther volleyball.”

Jemison opens their season against Thorsby High School on Aug. 18 at 1 p.m.