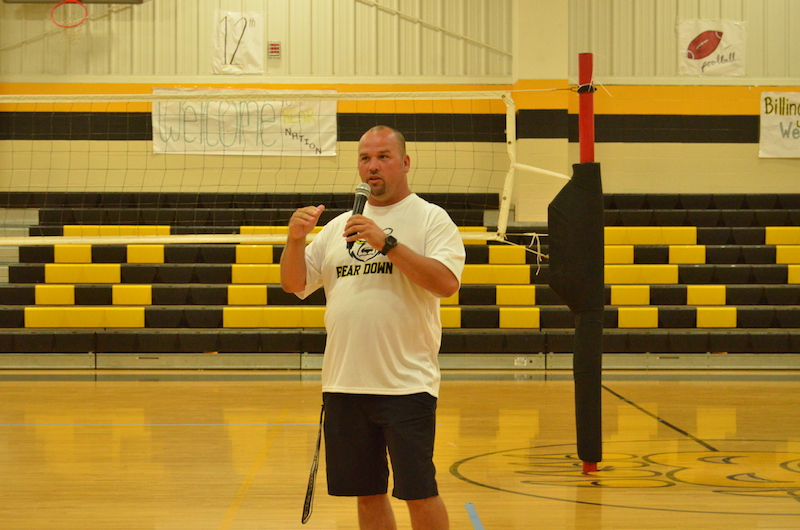 Lanny Jones was introduced on July 11 as the new head football coach at Billingsley High School in front of players and parents inside the school’s gymnasium. Jones, who has almost 20 years of head school coaching experience, returns to the Chilton County region where he coached at Isabella High School from 2007-2009. His wife, Angela, went to Billingsley for high school, and Jones said his family are happy to be back closer to home.

“It had been on our radar for a couple of years to go back, but timing was not right,” Jones said. “Just wanted to surround our kids with some family, and a slower pace. We think it is a great situation for our family, and both of our kids are good athletes, and I think they will flourish here.”

Jones spent the last few years at Gulf Shores High School doing college prep for high school students but wanted to get back into the high school football coaching ranks. With the family ties to Billingsley, and Jones’s desire for his two children to get a good high school experience and understand the value of time, the move to coach the Bears seems like a seamless fit.

“I have turned down some head coaching jobs the last few months because I did not think it was the right place for us,” Jones said. “I was willing to be patient to get to the right place. I was just about to accept an offensive coordinator job at another high school before Billingsley called. It was honestly perfect timing.”

Jones took the head coach job at Calera High School at just 24 years old in 2005. Jones then moved on to Isabella where in the three seasons with the Mustangs earned one playoff berth and captured a first-round win in 2008.

Jones earned coaching experience at Leeds High School, Elberta High School and Tishomingo County High School in Mississippi after leaving Isabella. Jones said he was always looking for the next best move for himself and his family. The experience at different levels and schools Jones said is an advantage for him.

“I think it does help because I have seen anything you want to throw out,” Jones said. “It does not change the way I coach, though. Our practices, our facilities and our weight training should look just like a bigger school. The only thing that should look different is the amount of kids we have and the size of the buildings, and that is where we are going.”

Billingsley Principal Angie McLean said Jones’s previous experience was what stood out to her during the hiring process.

“When he came on board, he was saying what me and the athletic director had been saying that we want to get stronger, so we can get better and we can win,” McLean said. “… Bring back that winning tradition that Billingsley is known for.”

Jones said the Bears will be a no-huddle, up-tempo type of team on offense. On defense, Jones wants to be very aggressive. Special teams will also be a focal point for Billingsley this season and Jones said around 20% of practice time will we devoted to the special units.

“They are going to get kids who play really hard because we are going to set a standard of how we run our program,” Jones said.

The acronym F.I.E.R.C.E is a rally cry that Jones spoke to the players and parents at the meeting. Fearless, integrity, effort, resilient, competitive and excellence are the words that make up the “FIERCE” saying for the Bears

The B.E.A.R Way was also put into practice by Jones at the meeting as well saying “it means we believe, have enthusiasm, have action and then results.”

“A lot of people want to start with the results,” Jones said. “It takes us to do all of those things before getting the results.”

The Billingsley Bears will host Prattville Christian Academy on Aug. 19 for their season opener.