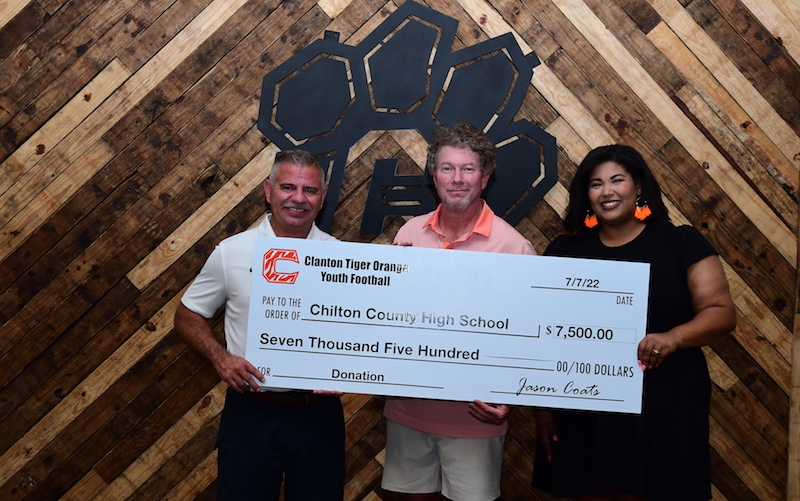 The donation will be used for tarps to cover the sidelines of the football field similar to what one would see on a college field. CCHS head football coach Marvin Morton said the tarps will help preserve the field because “the sidelines get the most wear and tear throughout the football season.”

He also thanked the team for its donation.

Clanton Tiger Orange president Jason Coats said he had heard of the need for the tarps while talking to Pinson, and the donation was a way to help the school and help the youth team.

“We wanted to show how invested that we are going forward,” Coats said.

“It is going to be a good use for a good cause for both our programs,” Pinson said.

“This is the first time in history that a Clanton youth football team will play their regular season games at the high school,” Coats said.

Morton said he was excited for the younger players to get experience on the high school field.

“It brings the youth a lot closer to the high school program and gives the players an opportunity to experience playing at Tiger Stadium,” Morton said.

The Clanton Tiger Orange team has players from 5 to 11 years old. This gives students an opportunity to play before reaching the middle school level.

Coats is entering his 15th season as president and has been with the organization for 18 years.

The season usually starts in September each year.