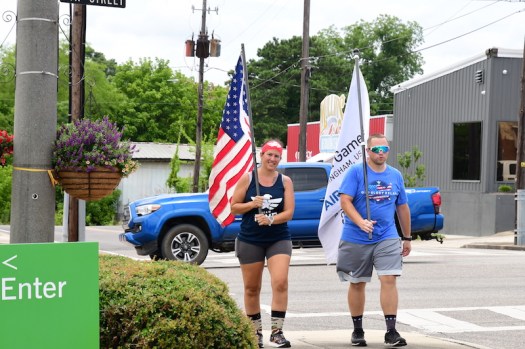 Christina Lariccia and Ryan Carter carry the flags for the team’s last leg of the relay. (JOYANNA LOVE | ADVERTISER) 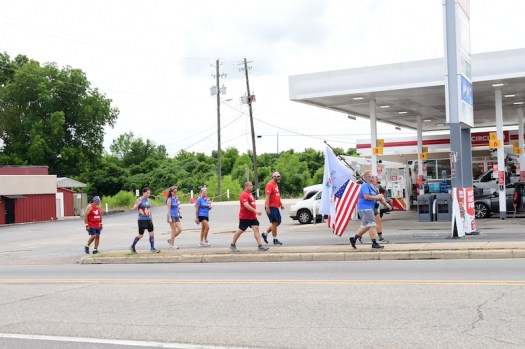 The Montgomery chapter of Team Red, White & Blue coordinated getting the flags from Montgomery to Chilton County. (JOYANNA LOVE | ADVERTISER)

The Old Glory Relay came through Chilton County on June 30 on its way to The World Games in Birmingham.

Veterans service organization Team Red, White & Blue started in Montgomery with members taking a section of the journey carrying an American Flag and the flag of the World Games. The team ended the day in Clanton. Team members cycled, ran or walked to get the flag to the destination.

The team was made up of active duty military, retired military and military family members.

Christina Lariccia, who has served in the U.S. Air Force for 19 years, is the Montgomery chapter captain for Team Red, White & Blue.

“When we found out that the Old Glory Relay was coming through Montgomery, of course, we wanted to help participate,” Lariccia said.

She said she enjoyed the opportunity for the team to support each other in accomplishing a goal.

A team from Birmingham will complete the rest of the journey.

The relay made its way through 15 states before arriving in Birmingham.

Ryan Carter, who serves in the U.S. Air Force, said he wanted to participate “for the history.”

This is the first time the World Games has been in Alabama and only the second time in the events 40 years that it has been held in the United States.

“Plus it means a lot with the Fourth of July weekend being an active duty member, giving back to the community, representing Team RWB and veterans,” Carter said.

He said he enjoyed the teamwork that was evident during the relay.

“Everyone got together. We worked it out,” Carter said. “We made it happen. Everyone chipped in … we rarely had a runner or walker alone.”

Carter has been a member of the Air Force for nearly 13 years.

Team Red, White & Blue focuses on helping veterans connect with others and build community when they are no longer active duty.

“When you are active duty and you are in the Air Force or you are in the Army, you kind of have that built in family where ever you go because you have a mission and you need to complete it, and once you separate, you are sometimes without that,” Lariccia said. “You might go back somewhere where there is not military, and maybe your family does not understand what you have been through, so you join an organization like us to have that unity and to have that belonging.”

“Our mission is that we are enriching veterans, and we are forging the leading health and wellness community for veterans,” Ryan Ruzek of Team Red, White & Blue said.