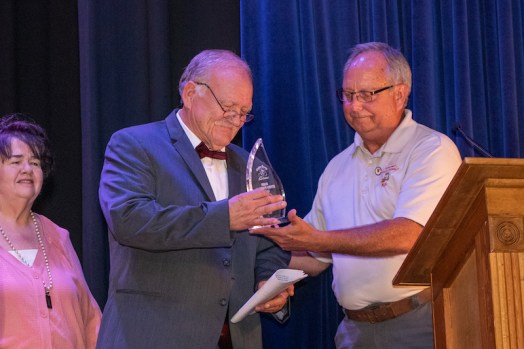 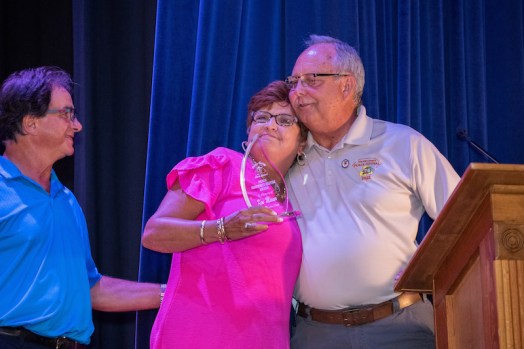 This year’s awards were presented to Al Headley and the Glasscocks.

The award came as a surprise to Al Headley, who has been the voice of the Peach Pageant for 46 years.

“We try to pay him, and he will just turn the check right back around and say, ‘just put it back in the fund,’” Clanton Lions Club president Alan Childress said. “I don’t know how we could do a Peach Festival without him. I really don’t.”

In total, Headley has been a part of the festival for 50 years.

Headley recounted how he had been a part of the event back when it was run by the Jaycees. He said when he was initially asked to emcee the pageants, he was nervous.

“I have certainly enjoyed it … There have been a lot of outstanding girls to come through,” Headley said. “I appreciate what the Lions Club does. Thank you so much for this. I really will cherish it.”

During her final speech as Miss Peach Queen, Halle Sullivan said of Headley “It has been amazing to have our backstage talks. No one could ever replace you.”

were presented the award in honor of the late Ken Messer, who initially committed to providing the crowns for each of the Peach Pageants Queens.

Childress said Ken and Mary Ann Messer donated the crowns and a diamond ring to the queens each year. A tradition that the Glasscocks have kept going.

“It’s been such a blessing,” Childress said as he thanked the Glasscocks. “… We appreciate them continuing to pour into our community.”

In 1993, the Peach Queen crown became an exclusive design.

MorLyns Fine Jewelry also designed the brooch that was presented to the Forever Queens this year and will be presented to each of the next Peach Queens at the end of their reign.

Headley said Ken Messer was who initially invited him to join the Jaycees and become involved in the Peach Festival.