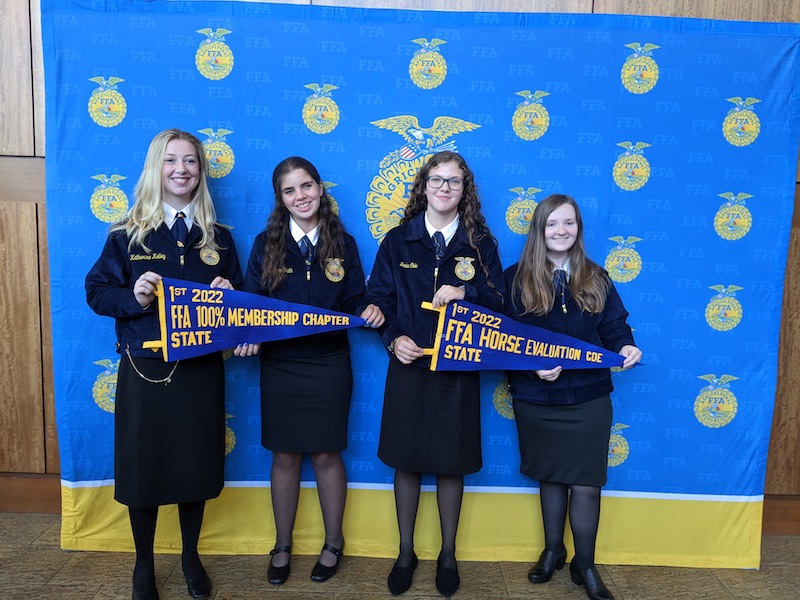 “We were very excited,” Lowe said of the win.

Kelley and Cole were so excited that they started to cry.

“It was unbelievable,” Cole said.

However, coming out of the oral presentation portion of the contest, they were confident that they had done well.

“In my 25-year tenure here, this is the first FFA team to win state,” FFA advisor Marlon Harton said. “… To have a team that has come together and have the self-will and determination and cooperation to work together as hard as they have done and to achieve this is huge.”

Harton said he hopes the horse evaluation team’s success will encourage other students to join FFA and be a part of competition teams.

Cole said the written portion of the competition was a test with multiple choice answers and identification questions, “where you just had to identify tack and other things like that.”

“Then, we went on to the horse judging, then after we placed the horses, we gave our oral reasons,” Cole said.

The oral presentations highlighted the features of the horse’s build and actions that had earned them the spot the team assigned it.

Kelley said the presentation was the most challenging of her academic career.

Vaith said the team met after school and on the weekends to ensure they would be ready.

The team also connected with community members for help.

Rianna Green, a former Thorsby FFA student who went on to Mississippi State, helped the team prepare for the horse judging portion of the competition.

“She told us what to expect and everything,” Cole said. “It was great.”

The Central Alabama Horse Club also assisted the team in its preparation. Harton said he was thankful to everyone for helping the team.

Vaith, who had shown and rode horses previously, said she enjoyed increasing her knowledge of horses and learning information “that I need to know if I have a career in horses.” Cole and Lowe also enjoyed learning about horses as a part of the group.

The challenge of learning the material and the effort involved were other aspects Cole enjoyed.

Vaith also enjoyed traveling to Auburn for the competition.

Getting to know each other was another aspect the team members enjoyed.

Kelley said she enjoyed all of the people that they met through their preparations.

Winning at state means the team advances to the national competition to be held Oct. 26-29 in Indianapolis. Anyone wanting to help support the CCHS horse evaluation team can contact Harton at mdharton@chiltonboe.com.