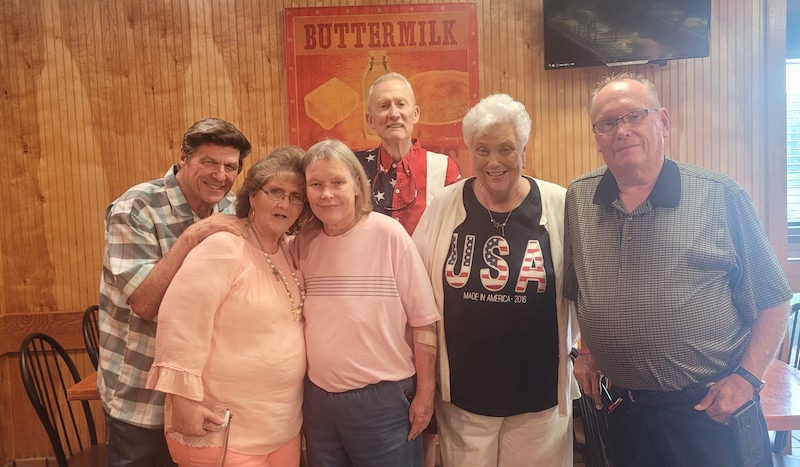 Finding her biological siblings was something that Laney Stanford Holland had thought about off and on during her adult life.

However, she thought the research would be too expensive.

Holland had been adopted by a pastor and his wife around the age of 3 in 1966.

“When my mom and dad adopted me, my name wasn’t Laney,” Holland said. “It was Nancy.”

Now, at the age of 59, Holland, who lives in Mississippi, began considering finding her family at the prompting of her friend Jo Rodrigus.

When Rodrigus offered to find her family for her, Holland was hesitant. Rodrigus has an enjoyment for genealogy, and she wanted to use these skills to help her friend.

Rodrigus’s plan was to stay with her sister in Prattville and take Holland to meet her biological siblings in Clanton.

At first, Holland did not believe Rodrigus. Once Rodrigus convinced Holland she was serious, Holland said she was “very, very happy.”

“I couldn’t believe it,” Rodrigus said.

She started crying because she was excited.

Holland discussed the plan with her husband Lane, then started getting ready for the trip.

Jerry Cleckler in Clanton had showed up as a first cousin to Holland through the genealogy website. Cleckler said he had received a friend request on Facebook from Rodrigus, which he accepted without even really meaning to.

After that, he received a message asking him about the DNA match.

Cleckler had previously received an Ancesty.com DNA kit as a gift and sent the information in. Rodrigus further confirmed the information by asking about other relatives that were showing up.

“She (Rodrigus) contacted me, and then I in turn contacted the brothers and let them know,”

Cleckler contacted Holland’s brother David Kirkland to set up a time and place for them to meet Holland. Her brother Jimmy was also able to stop by.

Holland usually wears a mask in public because she has been diagnosed with cancer, which has weakened her immune system. She has also had two strokes. However, she removed the mask long enough for her siblings to see her face.

The family members were happy to meet her.

“She seems like a very nice person,” Cleckler said.

Kirkland said he only found out she was coming to town the day before. He said it was a shock to see her for the first time, but that he was “real happy” to be able to meet her.

“I was excited,” Holland said. “It was unreal.”

Knowing that her real name was Nancy further confirmed to the siblings that she was in fact a family member.

“I would never have believed that this would happen,” Holland said.

During the visit to Clanton, Holland also visited the graves of her mother and sister Tammie.

Holland has stayed in touch with Cleckler and Kirkland, and the group is making plans to meet in Laurel, Mississippi in October. Holland said they are interested in meeting her husband Lane and her daughter.