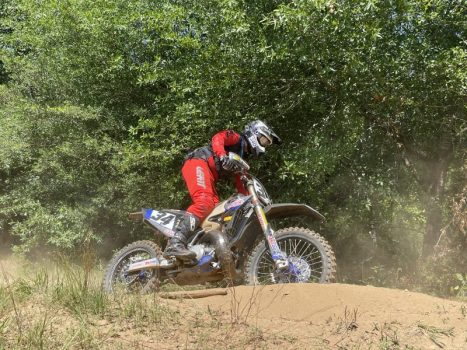 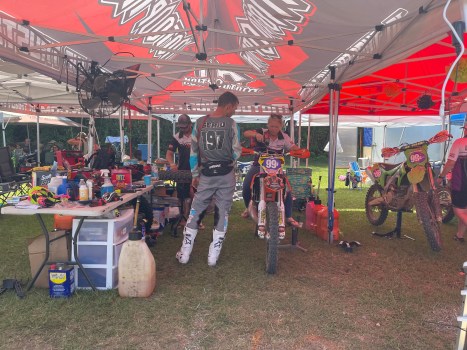 Some of the riders work on their bikes in the pits. (CAREY REEDER | ADVERTISER) 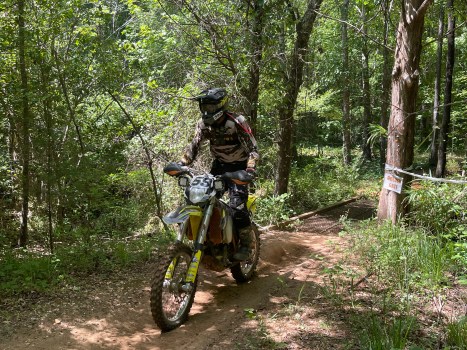 A rider crosses the wooden bridge on a portion of the race course. (CAREY REEDER | ADVERTISER) 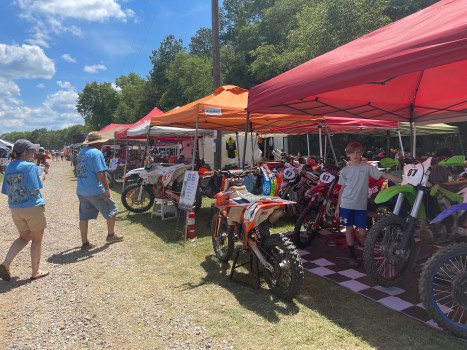 The pits were packed with different teams and manufactures. (CAREY REEDER | ADVERTISER) 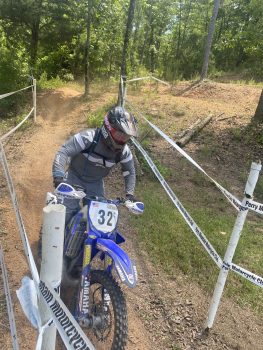 A rider comes into the starting gate to complete a lap. (CAREY REEDER | ADVERTISER) 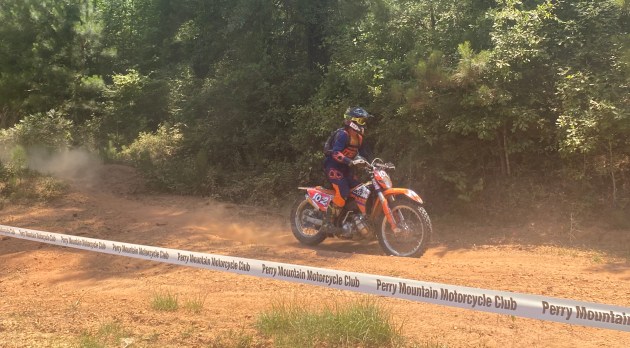 A rider on the front portion of the race course. (CAREY REEDER | ADVERTISER) 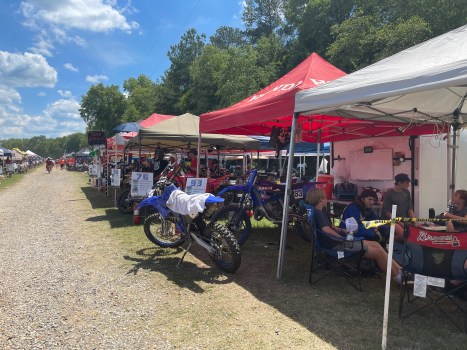 The pits were packed with friends, family and team members throughout the event. (CAREY REEDER | ADVERTISER) 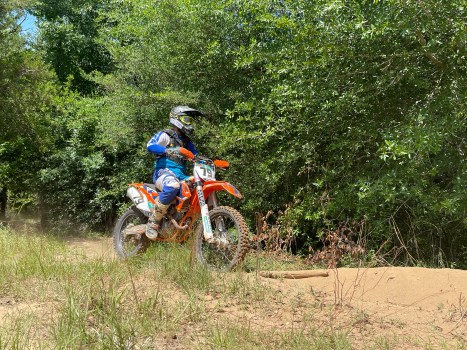 A rider comes through a hairpin turn on the backside of the race course. (CAREY REEDER | ADVERTISER) 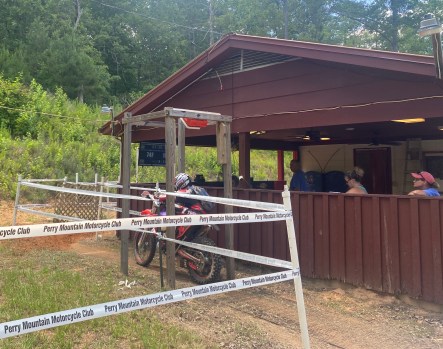 A rider comes underneath the transponder to record another lap. (CAREY REEDER | ADVERTISER) 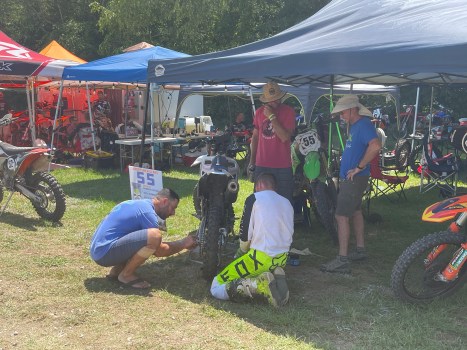 A team working on their bike during the 24-hour race. (CAREY REEDER | ADVERTISER) 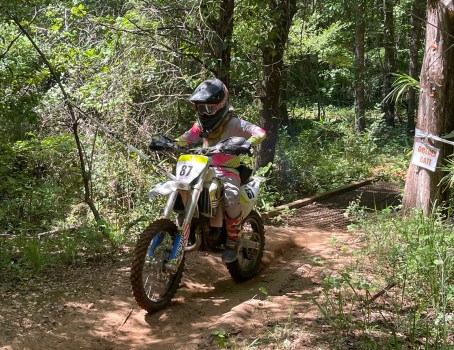 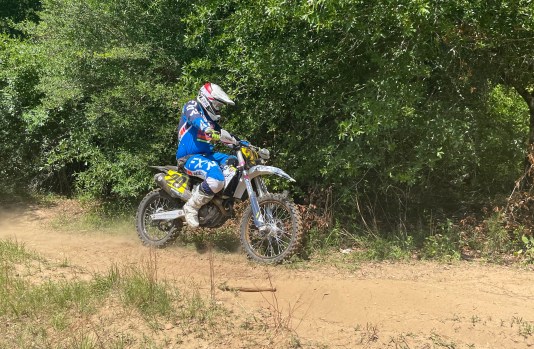 A rider hugs the riding line through a corner. (CAREY REEDER | ADVERTISER) 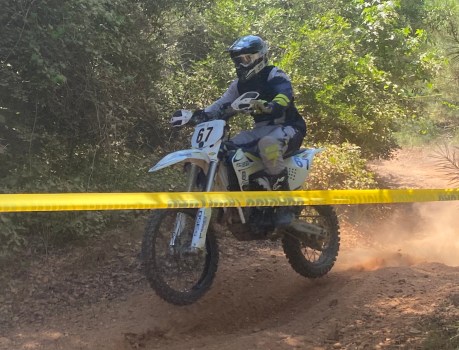 A rider comes down the hill to the front portion of the track. (CAREY REEDER | ADVERTISER 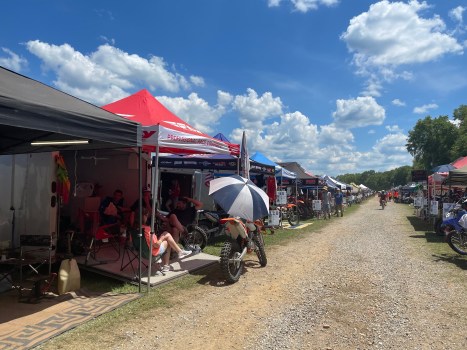 A rider comes through the starting gate to record a lap. (CAREY REEDER | ADVERTISER)

The pastures of Stanton roared to life on June 4-5 for the 19th annual Perry Mountain Motorcycle Club 24-hour Challenge.

Four hundred seventy-nine riders competed in the grueling full-day race with 3,290 laps turned on the almost 11-mile long racing course. This year was the largest attendance for the event in its 19-year history.

“It went awesome, everything went to plan. The scoring and trail layout, it was all good,” PMMC President Landon Carter said. “Other than a few riders getting hurt, everything went perfect and we did not have any other mishaps.”

The camping fields around the track were filled with campers, grills and bikes.

“It has got to help the local businesses getting a lot of revenue off of the race,” Carter said. “I know some people stayed in Clanton at the motels and ate out. I would just want people to recognize that the motorcycle community is helping the community by people coming to the county for the race.”

The NAP / XCGear Elite four-man team of Andrew Clark, Steve Nicholas III, Colby Yarbrough and Grady Faint led every lap of the race in route to their second straight overall 24-hour challenge win. The team turned an event-high 49 laps between the four riders totaling 24:00:03 of on-track time. The defending champions turned a lap every 29 minutes and 33 seconds. Clark turned the most laps for the team with 14. Clark was also awarded $1,000 for the fastest lap of the race in 25 minutes and 26 seconds.

The event had 12 different categories of teams from ironman single-man teams to expert teams of 5-6-man teams. The long and winding track consisted of bridges, hairpin turns, uphill climbs, whoops sections and jumps. All of the riders started at 10 a.m. on June 4 and rushed into the nearly 11-mile course with hopes of taking home a trophy 24 hours later.

However, overall Ironman winner Matt Brasher, of Calera, had an unideal start to his race. Brasher’s bike got stuck in first gear on the first lap of the race. He was able to get the bike into third gear, and Brasher finished the next 29 laps in the same gear.

“I thought my day was over, but I managed to work through it,” Brasher said. “I knew when I got it in third gear I could get around the whole course, so I tried not to mess with it.”

Brasher and the other riders battled dusty conditions throughout the course with little rain in Stanton the week before. The dust subsided as the race went into the night when the moisture came further up into the ground.

2022 was Brasher’s third attempt at the Ironman 24-hour challenge. He said the last few years he set a fast pace at the start of the race, and got physically burned out near the end of it finishing second his first two attempts.

“I knew what I had to do to win, and just had to keep going,” Brasher said. “The longer you sit there, the harder it is to get up and keep going.”

Brasher’s plan was six sets of five laps. He completed two sets before having two flat tires. He plugged one of them and had to change the other.

Every time Brasher would pit, his wife Brittany would fill his hydration pack up and his brother and father would fill up the gas tank. Brasher would drink a bottle of water and some Pedialyte, and would be in the pits for less than 10 minutes each time.

“It was survival mode at that point,” Brasher said. “Go out there and just get as much as you can. Once I got a two-lap lead on the next guy, I just started watching his times to make sure I had a good buffer zone.”

Brasher was on his bike riding for over 22 of the 24 hours and turned 30 laps around course winning the Ironman group on his third try. Brasher turned a lap every 47 minutes and 50 seconds.

Brasher said after a few days removed from the race, his hands are tensed up from gripping the handlebars, his lower back is sore and eyes are sore from the dust.