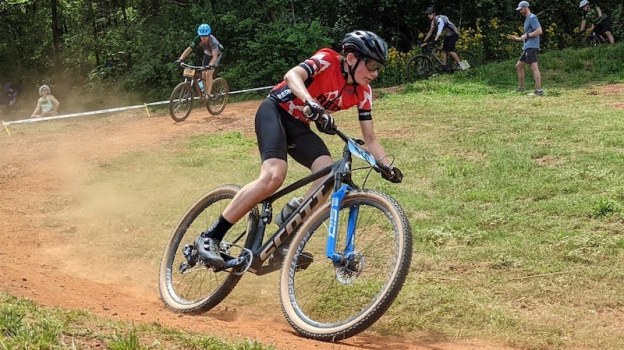 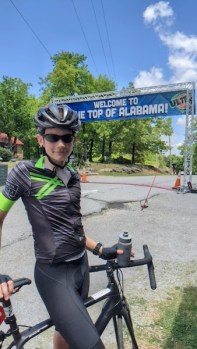 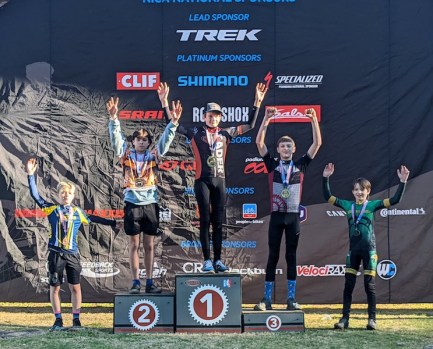 Jake Sosa on the top spot of the podium at an event this year. (AMANDA SOSA | CONTRIBUTED) 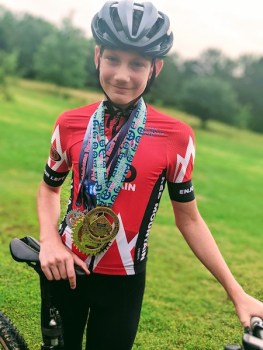 Everyone has their unique hobby or taste that they are interested in. For 12-year-old Jake Sosa, it is getting out on his bike and riding. However, Sosa is not going out for the casual afternoon stroll through the park. He is training constantly to become the best cyclist he can be.

Sosa was introduced to biking by his father, Jason, who was an avid cyclist himself. Jason got Jake and his brother J.R. a strider bike, a bike with no pedals, when they were young to ride around in the house.

Jake and J.R. soon gravitated to BMX racing where J.R.’s biking interest ends. Jake moved on from the BMX track to competitive mountain biking and cycling. When Jake entered the sixth grade this year, he did not hesitate to join the National Interscholastic Cycling Association team Red Mountain Composite out of Birmingham. Riders must be in the sixth grade in order to join a NICA team.

“I wanted to sign up for it right when I could,” Jake Sosa said.

2022 was his first competitive season with the Red Mountain Composite team. Jake attends Isabella, and the Mustangs do not field a high school cycling team. That is where composite teams come in for students like Jake.

“He does not have a lot of friends around here that ride mountain bikes,” Jake’s mother Amanda Sosa said. “In the Birmingham area, it is huge.”

Composite teams are made up of students from various schools who do not have a home team to compete for. The Red Mountain Team finished as the number one ranked team in division two in the state of Alabama.

“It was really exciting … You get a little nervous though, but it was fun to be on a team racing,” Jake Sosa said. “It was such a larger race than normal each week, but I had some older people on my team who were pretty good to help me.”

Jake began the season in the sixth-grade division for preseason time trial and the first event. Jake not only won both events, but he won them both by over three minutes.

After that, Jake petitioned to be able to compete in the freshman category with ninth grade riders. The petition was approved, and Jake placed in the top five in each of the next four races he competed in for the Red Mountain Team.

“We compared the times to others, and usually, I don’t want to be the fastest one in the race because you have to follow people who are faster to get better,” Jake Sosa said about moving up divisions.

“We were really surprised,” Amanda Sosa said. “We knew he was a good cyclist but apparently, according to others on his team, what he has done this year was pretty amazing.”

Aside from his NICA team, Jake Sosa has completed some other lengthy cycling events in the state in 2022.

Jake competed in the 65.9-mile Skyway Epic race on April 2 in Sylacauga. The mountain biking event took place on Sylaward Trail, and Sosa completed the race in 8:02:28.

Jake Sosa also competed in the Cheaha Century Challenge on May 15, a 100-mile road endurance race from Jacksonville State University to the top of Mount Cheaha.

Jake needed a coach to accompany him on the ride to enter the race. He had to stop at multiple rest points to allow his coach to catch up to him.  Sosa finished 58th out of 75 riders who started the race and completed it in 8:04:41.

“You have to stay hydrated and eat a lot,” Jake Sosa said of the endurance events. “You cannot go hard at the beginning because you will get tired out and you won’t be able to finish.”

Protein bars and protein chews are Jake’s go to riding snacks throughout the hours-long events and taking in as much water as possible.

“Sometimes it hurts when you get to the end of those long races because you are so tired out,” Jake Sosa said. “But it is really exciting to finish one.”

Jake got a medal in both events for completing the races. Jason Sosa asked coordinators at both the Skyway Epic and Cheaha Challenge who was the youngest rider to complete the races, and both said they believe Jake is the youngest to do so.

Jake’s training regime focused on upper body strength especially his back due to the constant leaning over the bike during races. He has ridden over 1,700 miles in 2022 is still planning on putting in the same amount of training throughout the summer.

Jake said he hopes to compete in cycling collegiately or professionally one day. A teammate of Jake’s on the Red Mountain Team recently went to train at the Olympic Training Center in Colorado Spring, Colorado. That has fueled an Olympics ambition for Jake.

“I hope people check out cycling more,” Jake said. “It is exciting when you complete those big races.”

Jake Sosa’s next event will be the 28th annual Bump N’ Grind Event on June 4-5 at Oak Mountain State Park in Pelham.