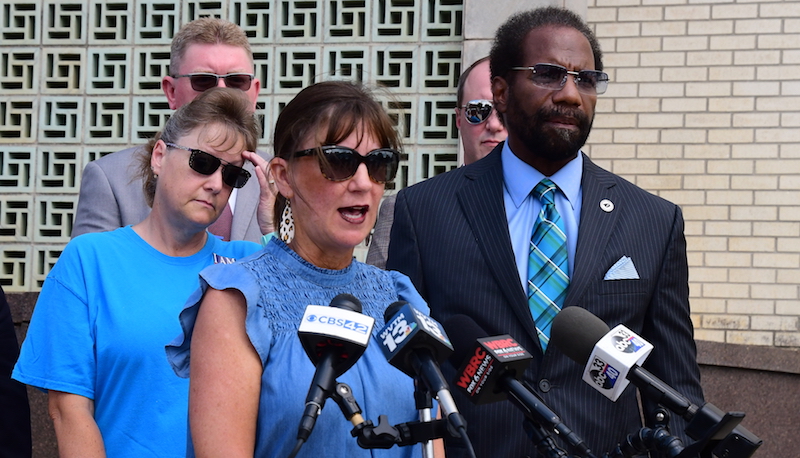 The Alabama Education Association has filed a lawsuit against Chiton County Schools Superintendent Jason Griffin on behalf of two employees who received letters stating they owe the school system thousands of dollars in overpayment.

Verbena High School lunchroom manager Christie Payne and LeCroy Career Technical Center nursing instructor Shellie Smith each received a letter stating that they had been paid for years of service when moving to their new position, rather than starting at year one of the new position.

The order also states that the board is to continue to pay the employees at the same rate while the case is in litigation.

During a press conference on May 20, AEA Associate Executive Director Theron Stokes said the

Chilton County Board of Education was not included in the lawsuit because there was no record of the board approving the letters being sent.

Board member Chris Smith said in a recent board meeting that the only reference to the issue in the board’s minutes was a question about getting an update.

Shellie Smith, who was a school nurse prior to becoming a certified teacher, said that when she initially found out Payne received a letter she “had no clue” that she would be in the same situation.

“I love my job and I love what I do,” Shellie Smith said. “Before I took the job, I asked, ‘Will I make this amount of money?’ They told me, ‘yes.’ I didn’t take any money. I have always thought that the money that I was paid was what I was supposed to be paid.”

Shellie Smith has worked for the school system for 19 years, and now worries that she will have to find another job when she is within five years of retirement.

However, for now, she said she remains focused on doing her job.

“The people that I work with are wonderful,” Shellie Smith said. “We have a great support system.”

The case has raised additional concerns for the AEA.

“We are concerned about the office itself (and) the miscalculation of teacher’s salaries,” Stokes said. “Now, we are also concerned that some of our teachers are being underpaid and just don’t know it. It is our attempt now to make sure the plaintiffs in this lawsuit are treated fair, and we know they don’t owe one dime back to the board of education.”

Stokes said the AEA does not have information on any teachers that have been underpaid, but documents to verify this will be asked for as a part of the lawsuit.

Requests for documentation prior to filing the case have been not been answered.

“They have not responded,” Stokes said. “They have ignored that.”

Payne said the situation has been “very stressful,” and “it’s hard to focus on anything right now.”

The letter came as a shock. Her initial reaction was to question why no one had spoken to her about the issue in person.

“I don’t have that kind of money to give back to them … We even have paperwork that says that is what I am supposed to be paid, so why would you suddenly decide that that was too much?” Payne said.

Payne has worked for the school system for 18 years.

There have been multiple Chief School Financial officers for the school system since 2015. Griffin was sworn in as superintendent in 2019.