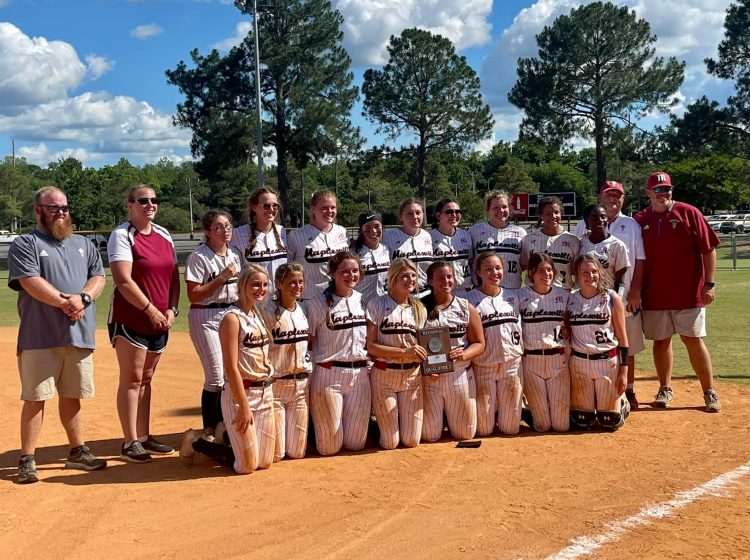 The Maplesville High School softball team found itself in the same position it did one year ago on May 16 at the 2022 AHSAA Class 1A Central Regional tournament. The Red Devils faced South Lamar High School last season in the final game of the regional for a spot in the state tournament, but fell 16-1.

This season, was much different.

“They embraced the challenge this year,” Maplesville coach Clark Watley said. “They had a tough mentality all weekend.”

Maplesville jumped out to a 3-0 lead on South Lamar in the first inning, and junior pitcher Lexi Smith was able to sprinkle runs across multiple innings to help the Red Devils to a 6-5 win.

“We’ve been waiting on it, and it finally came,” senior Emilee Smith said. “We finally clicked and it just all came together.”

South Lamar trailed by one run going into the bottom of the seventh inning, and Lexi Smith was able to hold the score steady at 6-5.

“Lexi really made the difference pitching wise,” Watley said. “She was relentless, and she did not give in.”

Maplesville took the scenic route to the last regional qualifier. The Red Devils beat Linden High School 17-0 on May 12 but dropped their next game that day to Holy Spirit Catholic School 10-0 to enter the loser’s bracket.

From there, Maplesville rattled off three straight wins on May 13, including the South Lamar win, to make the state tournament.

“It was all about mental toughness last weekend,” Watley said. “Since I got them in seventh grade, that is one of the first things we talked bout was being mentally tough.”

Watley said it was a collective effort from the team during the regional tournament and thinks his team is hitting their stride now.

Watley started at Maplesville when the seniors on this year’s team were in seventh grade. Anna Grace Small, Hannah Hollis, Emilee Smith, Avery Reed and Jayla Nix have all been under the guidance of Watley throughout their high school softball career. May 16 was arguably the most important day of their six years at Maplesville.

“It was the best feeling ever. I do not even think graduation could top it,” Reed said.

“You could tell we had good chemistry on the field. If someone made a mistake, we were encouraging, and whipped it off and kept going.”

“That senior bunch really stepped up,” Maplesville assistant coach Aaron Ratliff said. “We have been waiting for them to step up into their leadership roles, and they did big time.”

Watley gave a lot of credit for the season to his assistant coaches who he said “normally outwork him, when it used to be hard to do.”

“Surround yourself with good people,” Watley said. “If you want to turn a program into a winning program, you got to have good assistant coaches around you.”

Shawn Reed, Julie Knight, and Ratliff are the assistant coaches for Maplesville.

This week will be a structured week of practice for the Red Devils in preparation for the state tournament. May 16 will be all fielding followed by all hitting and ending with team defense at practice the next day. Maplesville will have one last batting practice on May 18 before traveling to Oxford for the state tournament. Watley wants to get his players over to Choccolocco Park to see the field and facilities on May 19, and the first game in the tournament for Maplesville will be May 20 at 10:45 a.m. against the defending Class 1A state champions in Brantley High School.

“We are past that, and we are on to our next opponent,” Watley said. “The next team is just a nameless, faceless team and that is what we say. No matter who you play, it is always nine on nine. It is the bunch who does the little things right that will prevail.”

Maplesville will play at least two games in the double elimination tournament.