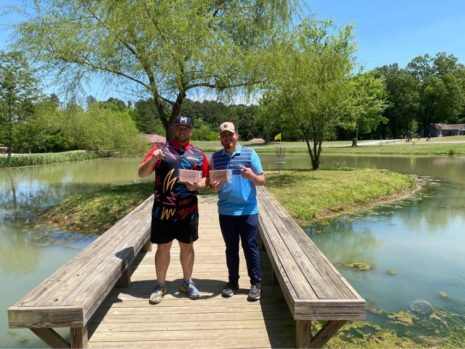 DJ Hines, left, and Thomas Gay with their trophies after winning the intermediate and recreation divisions, respectively, at the Tier-A event in Guntersville. (DJ HINES | CONTRIBUTED) 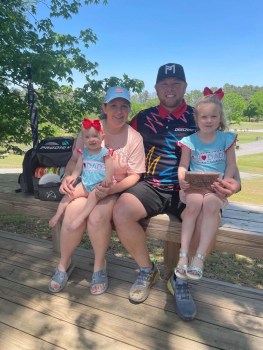 DJ Hines with his wife, Ashley and his two daughters Bree, left, and Nora after his win in Guntersville on April 28. (DJ HINES| CONTRIBUTED) 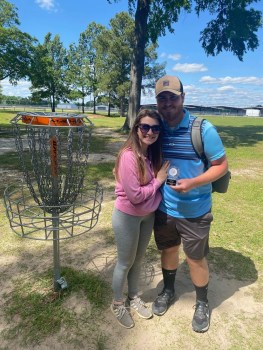 Thomas Gay and his wife Jenna after his win at the Aerial Assault tournament in Tuscaloosa on May 7. (DJ HINES | CONTRIBUTED)

DJ Hines and Thomas Gay each punched their ticket to the 2022 National Amateur Disc Golf Tour National Championships in Austin, Texas on Oct. 28-31.

Hines and Gay earned their spot in the national championships by winning the Zanfel Premier Tour A-Tier event at the Kudzu Cove Disc Golf Course in Guntersville on April 29-May 1.

The two had played the course once before, but they were not well experienced with the holes. They traveled to Guntersville for a practice round on April 28.

Gay said he was more worried about the off the course things such as travel and bringing all the necessary items with him to Guntersville. He was confident he could compete for the win, but he did not think he was the favorite.

Gay competed in the recreation division, and it was his first A-tier event. In disc golf, A-tier events are three rounds and are worth more points towards a players overall rating.

“In an A-tier, you bring your best game,” Gay said. “You do not come to mess around, you are coming to an A-tier event to prove you are good enough.”

Gay did bring his best game. Heheld the lead throughout all three rounds of the event and won the tournament by eight strokes posting a -10 score.

Hines played in the intermediate division and the Guntersville tournament was just his second A-tier event. In his first A-tier event last year, Hines held the lead through the first two rounds, but finished second.

“Going into it, I wanted to win. I did not want to finish second like I did last year,” Hines said. “After the first two days, I was in second, so I told myself I had been here before, and I knew what mental capacity I needed to be in.”

Hines found himself in familiar territory after the second round, in second place and trailing the leader by two strokes. He said the Guntersville course is tough due to the many water threats on the course and tight gaps off the tee box.

“When the lights come on, and you step up to that first tee it is a very different feeling despite all of the practice shots,” Hines said.

Hines was tied with the leader on hole 16. Gay finished his round before Hines, and met up with him for the last six holes of his final round to assist him on reads for throws.

“When you have a friend like that, that is willing to step up and do that, it gives you extra confidence,” Hines said.

Gay also won the C-tier Aerial Assault tournament in the recreational division by three strokes in Tuscaloosa on May 7.

Hines said both him and Gay throw similar disc and “we are very in tune with each other.”

“Thomas is a better distance thrower than I am,” Hines said.

“But DJ is a better putter than me,” Gay chimed in quickly.

The duo bounces different tips and questions off each other frequently and use each other to get better.

“Our games are very similar, and he saw a lot of himself in me and vice versa,” Gay said. “It was easy for us to improve on little things in our games.”

When it comes to the national amateur championships in Austin, Texas, Hines is planning to go. He said he has never been to Austin, and the courses will be bigger, but both of the players are looking forward to the challenge. Hines is going to make it a family trip with his wife Ashley, and two daughters, Nora and Bree.

“Mostly everyone there will have won a National Amateur Disc Golf Tour event, so going in they are all winners,” Hines said. “It is about what cream is going to rise to the top in those environments.”

The four-round tournament starts on Oct. 28, but the players have to be there the day before for a players meeting. Gay is a student at the University of Montevallo and is trying to plan his classes to have the gap in October to make the tournament. He said he has never played disc golf that far away and is going to limit his tournament play before October to save up money for the Austin trip.

“We have talked about it a lot, and we said if one of us goes, the other will do whatever it takes to go, too,” Gay said. “It is all about me staying confident out there. I was confident at the Guntersville tournament and I need to have that same mindset there.”

Hines and Gay are hopefully that someone in the community will help sponsor the duo to help them get to Austin to represent Chilton County.

“It would be nice if some local businesses could potentially sponsor us to go represent our community,” Hines said. “Our entry fee is paid for, but it is the things like getting a place to stay and the meals. That is when it gets tough.”

The duo has a few tournaments coming up with Hines playing in the 2022 Professional Disc Golf Association World Championships in Princeton, Indiana on June 21-25. Hines credits Clanton Outdoors for sponsoring him to help him get the opportunity to go compete there.

He will also compete in the Alabama State Games on June 11 in Dothan.

Gay’s next tournament will be The Peach City Classic on July 30, Chilton County’s biggest disc golf event of the year. That tournament is a C-tier event and filled up quickly last year. The turnout is expected to be good this year, too.

Online registration opens on May 13 8 p.m. on discgolfscene.com/tournaments/Peach_City_Classic_2022/register.