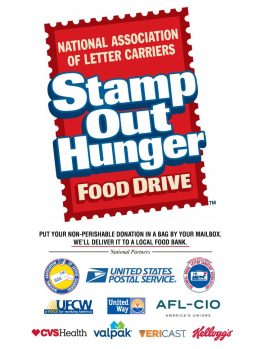 The Community Food Bank of Central Alabama is participated in the Stamp Out Hunger annual food drive by the National Association of Letter Carriers. (COMMUNITY FOOD BANK | CONTRIBUTED) 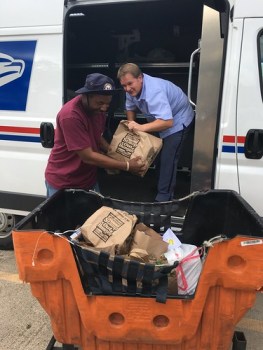 A letter carrier delivers some of the food that was donated during last year’s food drive. (COMMUNITY FOOD BANK | CONTRIBUTED)

The Community Food Bank of Central Alabama will be participating in the country’s largest one-day food drive on May 14. This is the 30th year the National Association of Letter Carriers have put on the food drive.

“At the Community Food Bank, we’re extremely proud to take part in this national food drive,” Nicole Williams, interim executive director at the Community Food Bank of Central Alabama, said. “We are in need of food donations now more than ever, so we’re incredibly grateful for this campaign and the impact it will have on our neighbors facing food insecurity.”

Chilton County residents who want to participate can do so by putting their donations of non-perishable food next to their mailbox before their mail is delivered. The mail carriers will drop off the mail and collect the food on their routes and deliver it to the CFB.

“Letter carriers are a part of every neighborhood in the nation, and we recognize that the need for food assistance in our communities is great,” Antonia Shields, president of the NALC, said in a press release. “The National Association of Letter Carriers encourages everyone to participate in the annual Stamp Out Hunger Food Drive, because we believe that together, we can help stamp out hunger in America.”

The food drive is held annually on the second Saturday in May and over 10,000 cities and towns participate in it. Around 1.82 billion pounds of food has been collected over the last 30 years the drive has taken place, according to the Community Food Bank of Alabama’s press release.

Recent supply chain and inflation issues have affected the CFB’s food intake and donations going into the summer are needed more now. The United Way Hands On volunteer center is partnering with the CFB to help intake the food donations.

“Collaborating with the Letter Carriers and the Community Food Bank of Central Alabama each year is extremely rewarding for our organization and volunteers” Benga Harrison, director of the United Way Hands On center, said. “We are always so moved by the generosity and goodness of all those involved.”

Although the United Way has volunteers available, the CFB is looking for anyone interested in helping with the distribution on May 14.

“The biggest thing we are looking for from the community, besides donations, are volunteers,” Williams said. “We would love to be able to have as many volunteers as possible (from Chilton County).”