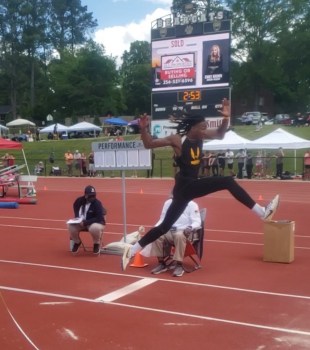 Chilton County was well represented at the 2022 AHSAA Outdoor Track & Field State Championships with 10 athletes competing across 12 different events on May 6-7.

Maplesville High School sent two runners to the Class 1A state meet at Cullman High School. Junior Dalton Carter was the only athlete in the county to bring home a medal – bronze in the 110-meter hurdles. Carter posted a 19.09 in the prelims to finished sixth and advance to the final. He picked up almost a second and a half in the finals to post a 17.62, good enough for third place and a spot on the podium.

Carter also competed in the 300-meter hurdles and finished in fourth place just .89 away from his second bronze medal at the meet. Sophomore Will Harrison was the other Red Devils athlete at the meet. Harrison finished 12th in the 800-meter run with a time of 2:22.47. He finished 14th in the 1600-meter run after posting a 5:26.89.

Leo Coradi was the only Chilton County High School athlete at the Class 6A state meet at Mickey Miller Blackwell Stadium in Gulf Shores. Coradi finished fourth in the long jump with a 22-foot leap that put him in a tie for the bronze medal. However, the tiebreaker goes to the athletes next best jump, which put Coradi in fourth place.

“He made the finals in both events, and had to do the job four times to get there,” CCHS coach Rishard Davis said. “There were just some great athletes out there. I thought he competed very well this past weekend, and he was happy with his performance.”

Isabella High School sent seven athletes to the Class 2A state meet that was also at Cullman High School. De’Asia Wilson competed in three events during the meet and almost captured a medal. The junior finished fourth in the high jump with a 4-foot, 8-inch leap, her highest jump of the season. Wilson was two inches from the podium.

“(Wilson) has only been doing high jump for a month or so now, with some more time she will be very good at that in the future,” Isabella coach Landon Mims said. “We’re going to go back to work this offseason with her and get her to increase it even more.”

Fellow senior Phillip Williams placed fifth in the triple jump with a 39-foot, 7-inch effort, over a foot higher than his previous personal best jump. Williams was less than two feet away from the bronze medal.

Senior Raymond Boston was ninth in the long jump with an 18-foot, 7-inch leap and 22nd in the 100-meter prelims with a 13.26. Boston injured his leg during the long jump event and was hindered during his 100-meter prelim race. The senior was unable to compete in the high jump due to his injury.

Eighth grader Jimmie Sosa finished 10th in the javelin throw with a 127-foot effort. Sosa was the youngest competitor in the Class 2A boy’s javelin throw.

“I’m just proud of all the athletes we sent there in all the different events,” Mims said. “They had a very good year.”

The county high schools will hope to build on their state championship berths this year into next season.