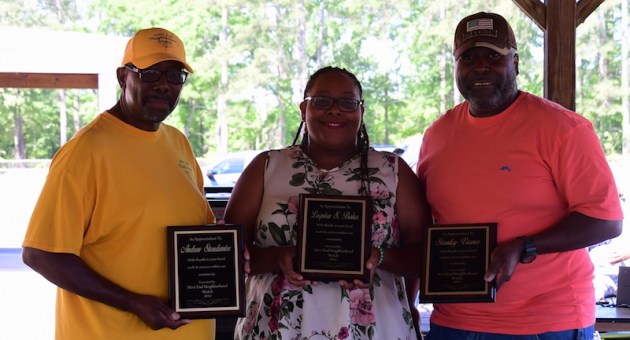 Andrew Stoudemire, Laquira S. Baker and Stanley Varner were each thanked for their service to the community and presented with a plaque during the May Day festivities at E.M. Henry Park. (JOYANNA LOVE | ADVERTISER) 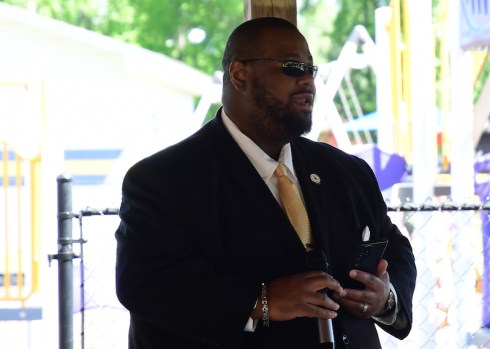 Awlahjaday Agee of the Clanton City Council spoke about becoming a great community during the event. (JOYANNA LOVE | ADVERTISER)

West End Neighborhood Watch honored three leaders in the community during the May Day celebration on May 7.

Andrew Stoudemire, Laquira S. Baker and Stanley Varner were each thanked for their service and presented with a plaque.

Francine Lewis of WENW said Baker “took the initiative to bring something to the community that was much needed” through her father, daughter dance.

“It was very successful in the two years we were able to do this,” Baker said. “It was amazing to see the fathers come out with their daughters.”

Velma Tinsley of WENW presented Varner his award. She said he was “born and raised in this community.” After retiring from the military, “he found his way back home,” Tinsley said of Varner returning to Chilton County.

She said he has done everything he can to make efforts of the neighborhood watch successful.

In honoring Stoudemire, Jackie Baker of WENW said he is a hard worker. Stoudemire is involved in various volunteer opportunities, and he dedicates time to keeping the community looking good by picking up trash on the side of the road.

“Thanks for your hard work in serving our community,” Baker said as he presented the award.

Tinsley said Stoudemire is also faithful to get his family involved.

Clanton City Council member Awlahjaday Agee was the guest speaker for the event.

“West End is good community, but I want to challenge us to be a great and a beloved community,” Agee said.

Attendees continued to enjoy vendors and each other’s company while grilling and eating throughout the event.