The Jemison FFA program welcomed state leaders and guests to their annual banquet to honor the accomplishments in the 2021-22 school year. (CLAY MIMS | CONTRIBUTED) 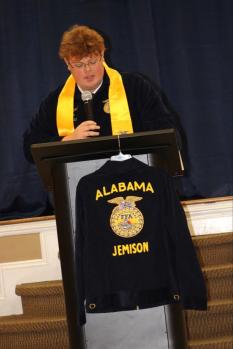 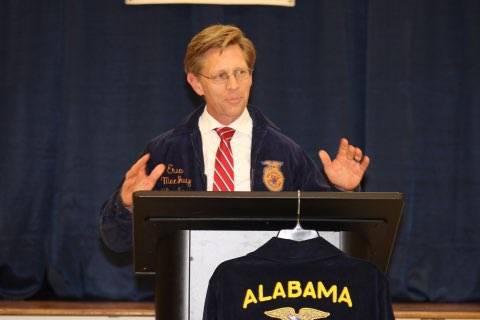 Dr. Eric Mackey giving his speech to the Jemison FFA during the banquet on May 5. (CLAY MIMS | CONTRIBUTED) 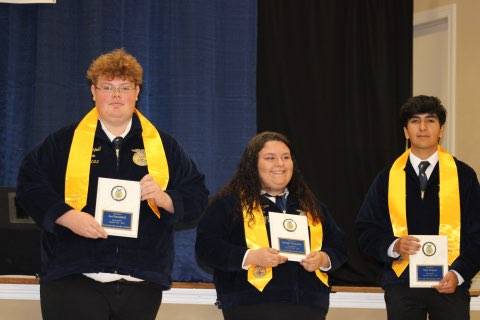 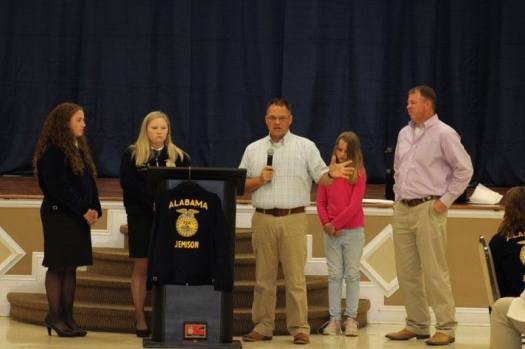 The Jemison High School FFA program held their annual banquet at Jemison City Hall on May 5. Future farmers and agricultural workers filled the city hall to honor what was accomplished by the program throughout the year and those moving on.

The banquet began with a few state leaders speaking to the students and guests. Alabama State Superintendent of Education Dr. Eric Mackey was first, and he talked about how FFA helped his career and changed his life for the better. Mackey reflected on his time in FFA as a student and mentioned certain traditions like earning his Green Hand Award by sticking his hand in green dye.

Lileta Jenkins, Alabama state manager of Children’s Policy Council, spoke next. She talked about how FFA has helped her in her career and spoke highly of the Jemison student she met that night, commenting that she was “impressed by their professional and mature mindset.”

Awards were given out after to students for career and leadership development and other miscellaneous awards. Three officers, Levi Burchfield, Kaleigh Vanderslice and Yahir Delgado were awarded $500 scholarships by the Alabama FFA Alumni Association.

“This year’s officer team was the most involved and dedicated officer team that I have had,” Jemison FFA teacher Clay Mims said. “They put a lot of time into it.”

The officer team highlighted some of the experiences they had throughout the year. The team took a trip to Georgia where they toured farm equipment manufacturing companies, toured agricultural schools and attended the Sunbelt Agriculture Expo.

“Our most memorable time this year was our trip to Georgia,” Burchfield said.

The senior officer team also spoke about the benefit the Jemison FFA program has on their future plans.

“It is the best, honestly. We learn a lot here,” Cruz said.

The officer team all want to pursue careers in agriculture, but on different avenues. Burchfield wants to get involved in the business management side of agriculture, while Cruz wants to raise cows.

“I think it’ll really help us in the future,” Collum said. “I want to be a veterinary, so I can see it helping me in the long run.”

The Jemison FFA also presented a memorial scholarship in honor of Matthew Skelton who passed away in August 2021 after a battle with cancer. Burchfield was awarded the scholarship for his work throughout his time in the Jemison FFA program.

The senior officers ended the banquet by giving their retiring speeches and installing the new officers for the 2022-23 school year. The new senior officers for next year are Collum as the president, Cruz as the vice president, Juarez as the secretary, Josh Glass as the treasurer, Kyleigh Vanderslice as a reporter, Flores as a sentinel, McGraw as chaplain and Lauren Jones as a student advisor.

“People have this mindset that agriculture is strictly production – raising livestock and growing crops,” Mims said. “The whole agriculture industry is so diverse, from marketing, engineering, the medical side of things and all the medicines, ag law. Having this program is very beneficial to them.”

The banquet meal was catered by the Jemison Culinary Arts Department.