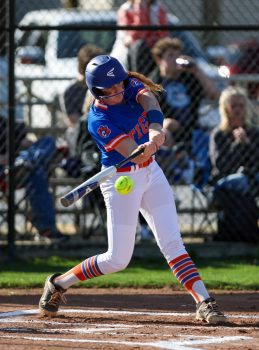 Senior Marlie Giles finishes her Chilton County High School softball career and will move on to the University of Alabama in the fall. (BRANDON SUMRALL |ADVERTISER) 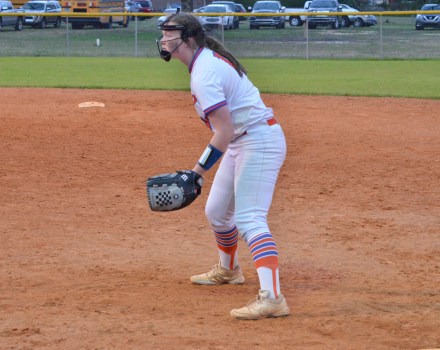 Eighth grader Mallie Harrison will be a key returning piece next season for the Tigers. (CAREY REEDER | ADVERTISER)

Chilton County High School traveled to Helena High School for the AHSAA Class 6A Area 6 tournament on May 3-4. The tournament was played in a double elimination format.

The Tigers, the two seed, matched up with Calera High School in the first round on May 3.

The game was tied at one run going into the bottom of the fifth inning. Sophomore Josie Cornell plated the go-ahead run with an RBI single to put CCHS up 2-1.

Junior Maecie Driskell and senior Marlie Giles each launched three-run home runs later in the inning to make it 8-1 after five innings. Calera scored three runs in the top of the sixth inning but could not mount anymore of a comeback and CCHS won 9-4 to advance to play Helena.

Macey Pierce added a solo home run in the game, and Driskell and Marlie Giles led the Tigers at the plate with three RBIs a piece. Marlie Giles earned two walks in the game.

In the semifinal game later that day, Helena knocked off CCHS 15-5 in six innings to advance to the area title game.

Pierce led the Tigers going 2-for-3 at the plate with a two-run homer, two RBIs and two runs scored. Marlie Giles had a two-run homer run in the game and went 1-for-3 in the game. Cornell added a double and an RBI.

CCHS was sent to the consolation brackets where they would face Calera for the second time in as many days. The notorious saying, “it is hard to beat a team twice,” came true for the Tigers on May 4.

The Tigers fell behind 4-0 in the first inning and fell 7-4, missing out on a Class 6A regional berth.

“We had high expectations going into the tournament, hoping to keep the ball rolling,” Giles said. “We ran into a solid Calera team who got hot towards the end of the year, and just did do what it takes to beat a good team.”

CCHS is a very young team, starting multiple seventh and eighth graders and freshmen throughout the season. Johnny Giles also purposefully schedule the Tigers against stiffer competition during the regular season to prepare his players for the tough area they are in.

“When you schedule your games in the offseason, you are not trying to pad your schedule to get a bunch of wins,” Giles said. “You are trying to play really good competition to make your team better long term, and we did that.”

The Tigers finished the season 24-22 overall and third in their area, but hope their young core can use the 2022 season to grow into next season.

“It just was not in the cards for us this year, as simple as that,” Giles said. “I don’t have any regrets. We did the things we needed to do to get better, and we just have to tip the cap to the team that was better than us yesterday.”