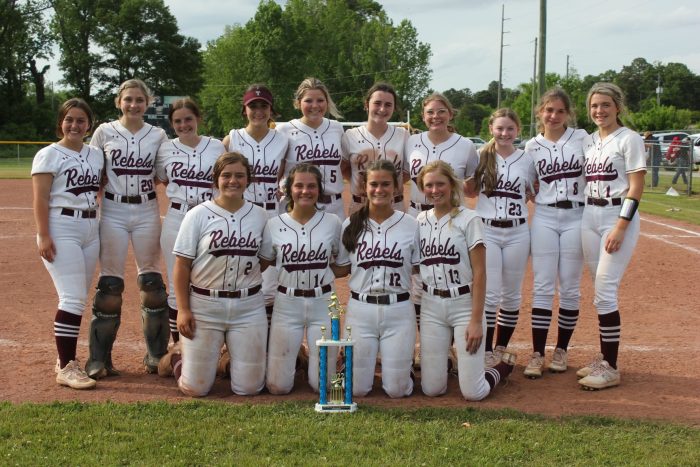 The Thorsby High School Rebels softball team won the AHSAA Class 2A Area 6 tournament with a 2-0 sweep of the Isabella High School Mustangs on May 3. (CAREY REEDER | ADVERTISER)

The Rebels needed just the first two games to win the tournament, and sophomore pitcher Makinley Turner was great in the circle.

In game one, Turner turned in a stellar outing going the full seven innings allowing five hits and one earned run while striking out 10 batters.

“We are blessed to have her, and for a couple more years,” Thorsby coach Holly Matson said. “McKinley was hot in that first game, so we decided to leave her in for the second game, and I think it worked out well.”

The Rebels got two runs in the bottom of the first inning after Turner drew a bases loaded walk to plate the first run of the game. Autumn Edwards was the next batter and singled to right field to make it 2-0. Brooklyn Reeser singled in the bottom of the second inning to add another run for Thorsby. A Cameron Lockhart double followed by a Lindsey Burnett single posted three more runs to bring the score to 6-0 after four innings.

Lockhart was 3-for-4 with two doubles, a single and three RBIs. Burnett added two RBIs in a 2-for-3 effort in the game.

The entire defensive infield for Thorsby in the area tournament were their four seniors — Edwards, Lockhart, Burnett and Peyton McManus.

“We have been a hitting team all season, so we are able to jump out in front of most teams,” Matson said. “It gets our energy high, and I believe the better hitting we have, the better we play in the field.”

Isabella could not get anything going on offense until the top of the five inning. Aliyah Patterson was hit by a pitch and advanced to third base on an error. Cadence Headley scored Patterson with an RBI later in the inning.

Thorsby added three more runs in the sixth inning to clinch game one 9-1.

In game two, the Mustangs came out fighting. Kristin Wilson hit an RBI single in the top of the first inning to give Isabella its first lead of the tournament. Isabella got a good outing from pitcher Auburn Bassett who went three and one-third innings giving up two hits and three runs, two of those were earned.

Thorsby got the run back in the bottom half of the first inning with Turner getting an RBI on a groundout.

The Mustangs took the lead back in the top of the third inning when Anna Johnson reached on a dropped third strike, and Headley scored from third base to make it 2-1.

Headley went 3-for-4 in the game with a double.

“It was really hot, the girls were really getting tired,” Matson said.

“I think they knew if they did not get it done the second game, that third game was going to be even tougher.”

The Rebels responded in a big way in the fourth inning. McManus plated a run to tie the game at two. Later in the inning, Brinley Giambrone laid down a bunt and reached on a throwing error. The Rebels scored three runs on the error to jump out to a 5-2 advantage.

“I think to start the second game the heat was getting to us a little bit,” Matson said.

“We slowed down a bit at the end of the first game, but we were able to play Thorsby softball and get ourselves put back together, and finish the game out strong.”

Giambrone and Edwards were the only Rebels hitters with a multi-hit effort, each posting two.

Turner punched in the sixth and final run for Thorsby with a single to center field in the bottom of the fifth inning to put the game out of reach.

The Rebels hold a 19-7 record after the area tournament, and withstood a little drop off in April when some players were absent due to illness. The Rebels have not had many close games this season, and Matson welcomed a bit of adversity in game two.

“Overall we’re getting ourselves put back together, just fighting the heat right now,” Matson said. “We’re excited and ready for our first regional game on Thursday.”

Thorsby will travel to Montgomery on May 12 for their first regional game at 10:45 a.m. Their second game is scheduled for 4:45 p.m. the same day, barring any schedule changes.

Isabella will also advance to Montgomery to play in the regional tournament for a chance to make the AHSAA Class 2A State Championship bracket.