Mustangs flexing muscle on the field and track 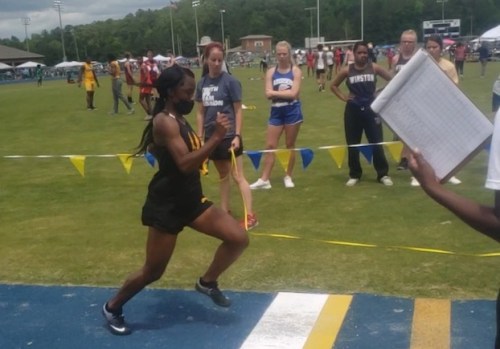 De’Asia Wilson will compete in three events at the AHSAA State Championship meet on May 6-7 at Cullman High School. (LANDON MIMS | CONTRIBUTED) 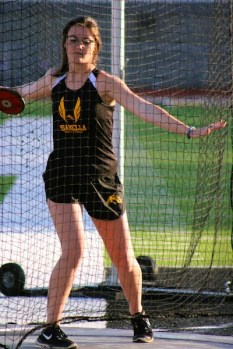 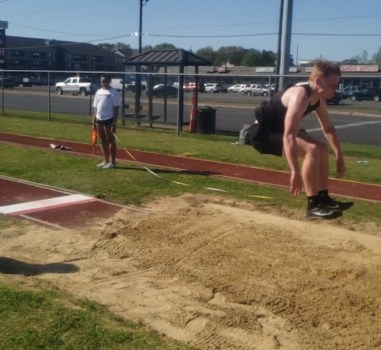 Phillip Williams will compete in the triple jump at the AHSAA State Championship meet on May 6-7 at Cullman High School. (LANDON MIMS | CONTRIBUTED) 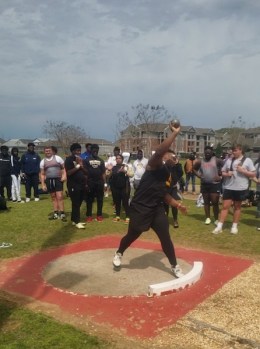 Caleb Washington will compete in the shot put at the AHSAA State Championship meet on May 6-7 and throw for Stillman College next season. (LANDON MIMS | CONTRIBUTED)

Isabella High School has established themselves as the fastest high school in Chilton County.

Isabella High School had a county-high seven athletes advance to the state meet from the Class 2A, Section 2 track meet at Paul W. Bryant High School in Tuscaloosa on April 29.

Junior De’Asia Wilson captured three state meet berths in the 100-meter dash, high jump and long jump. Wilson finished sixth in the 100-meter prelims and finished eighth in the final with a 13.90. Wilson ran a 13.58 in her prelim race.

The junior narrowly missed out on the state meet in the 100- and 200-meter dashes last year, but redeemed herself in 2022.

Wilson set a new IHS school record in the high jump on April 15.

“She’s had a very good year, and she has always been super athletic,” Isabella coach Landon Mims said. “We all knew she was fast, and she has been able to showcase that this year.”

Isabella senior Karsen Morris advanced to the state final in the shot put, discus and javelin. Morris took home fifth place at the sectional meet in the discus with a 69-foot, 2-inch throw and the javelin with a 78-foot, 11-inch throw.

Mims said Morris has been an extension of himself into the team.

“Karsen has been a leader with me all year,” Mims said. “I know I can trust her to go an teach our other athletes some of the things we need to do.”

Morris set new personal records in all three events throughout the 2022 season. She only started shot put midseason this year, but made the state meet by throwing a foot and a half further than she ever had at sectionals with a 26-foot, 9-inch toss.

Isabella returned a lot of athletes from last year’s team, but added some newcomers as well.

“(The newcomers) have been a big help to us,” Mims said. “It is a special group of kids and athletes who have been able to pick up the things that we are trying to teach well. They compete at a high level.”

Raymond Boston has solidified himself as the fastest person at Isabella and proved that in the sectional meet earning three state meet berths. Boston finished fourth in the long jump with a 19-foot, 2-inch jump and fifth in the high jump with a 5-foot, 6-inch leap.

Boston set the IHS school record in the high jump on April 1 with a 6-foot jump, then broke that record with a 6-foot, 2-inch jump.

Then, the senior really proved his worth.

Fellow senior Phillip Williams qualified for the state meet in the triple jump with a fourth-place finish at sectionals. Williams jumped 38 feet, 11.25 inches. He has done nearly every event AHSAA track and field sanction and picked up the triple jump during practice this season. Now, he is a triple jump state qualifier.

“He has been a real leader for us since I took over a few year ago,” Mims said. “I can trust him.”

The boys field team sent the last three Mustangs to Cullman High School for the state meet. Senior Logan Littleton placed third in the shot put and discus at the state meet last season. He will return this season after finishing second in the shot put with a 42-foot, 1-inch throw. He followed that up by winning the sectional discus throw with a 136-foot, 6-inch toss. That was 11 feet further than second place.

Mims said he changed some things around with Littleton this season to try to gain some extra length on his throws.

“I’m proud of him sticking to the process and keeping with it,” Mims said. “That’s been our goal since last year, to get him back to state, and he is going to try to get it done this weekend.”

Caleb Washington, whose brother Willie throws at Stillman College, placed fifth in the shot put at sectionals with a 40-foot, 8-inch throw. Mims said Caleb has been chasing Willie on the school record board all season, and “he’ll have a good shot at getting the podium at states.”

Eighth grader Jimmie Sosa finished fourth in the javelin at sectionals with a 120-foot, 3-inch toss to reach the state meet.

“(Jimmie) has a lot of potential in him in the future,” Mims said.

The Mustangs produced seven state athletes from its 17-person squad. That is 41% of their team going to Cullman to compete. Mims said with a smaller squad, the team scores are not his main concern, but helping his athletes perfect their individual events is.

“We are trying to do all we can to be competitive,” Mims said. “I’ve been blessed the last two years to have some great athletes come through (Isabella), and they are willing to do whatever it takes to win. They really show how tough and competitive they are every day at practice.”

The AHSAA Class 1A State Championship Meet is May 6-7 at Cullman High School. Both days begin at 8 a.m.

Other Isabella athletes who competed at the AHSAA Class 2A Section 2 meet were: