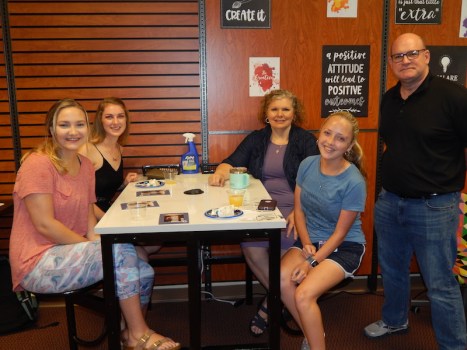 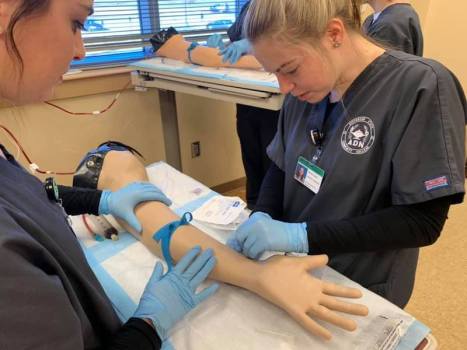 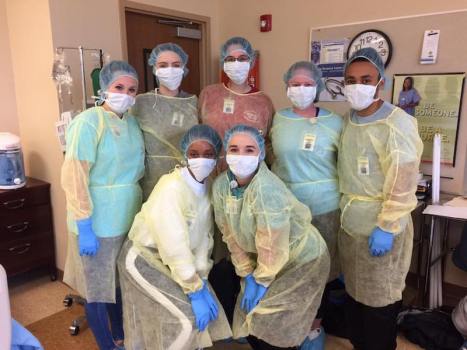 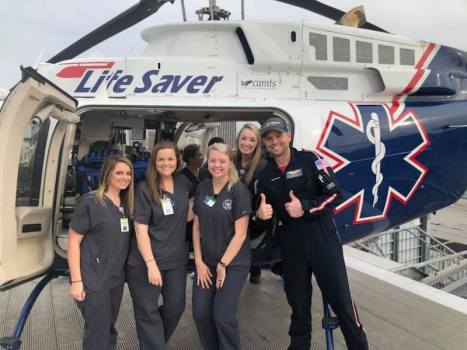 A group of nursing students stands near the LifeFlight helicopter while completing clinicals at UAB Hospital. (CHRISTOPHER FORBES | CONTRIBUTED)

The nursing program at the Jefferson State Community College Chilton-Clanton campus will celebrate its 10th class of graduates this month.

Forbes said the department still occasionally hears from students who were in the first graduating class. He said he enjoys seeing where former students are in their careers and what they are up to.

“A lot of them have gone on to become things like nurse practitioners,” Forbes said. “We have a couple that have actually started their own businesses.”

Photos of previous cohorts line a hall of the nursing department at the college.

“It is kind of neat to … look back and think about how they were when they were a student, when they were insecure and then you meet up with them in the hospital a few years later and they are all confident, and they shake your hand,” Forbes said. “It is a pretty neat feeling.”

Forbes has been a part of the department since the first year.

“I like to think that we do more than just produce nurses,” Forbes said. “We are basically producing people who can contribute to their own communities.”

Forbes said he sees being able to train nurses, many of who will find jobs close to home, for their careers in this rural community as a way to improve Chilton County for everyone.

“It is pretty awesome to have the new hospital (Ascension St. Vincent’s Chilton) here too and walk in and have our own students taking care of our family members,” Dr. Julie Jones, who has taught in the program for six years, said.  “That’s a really great feeling.”

Jones focuses on “critical thinking and critical reasoning” that a nurse needs to make good decisions in medical situations in her courses.

“It is a work in progress,” Jones said. “It takes time to develop those skills.”

Students first have Jones for a couple of days in their second semester when they begin their clinicals, when they get to put their book knowledge to practical use, then they are with her through the final fifth semester of the program. She said working closely with the same group of students creates a family atmosphere.

“To see the growth that they have had over that time frame is really awesome,” Jones said.

Students complete an Associates of Applied Science and qualify to test for the Registered Nurse licensure exam.

Students graduating this year had a unique experience as COVID-19 precautions forced the school to go virtual for a little while and not as many options were available for hands-on experience.

“We had to be very innovative and think out of the box to come up with some things that we could do virtually on Zoom,” Jones said.

“The Alabama Board of Nursing had to change their policies regarding clinic time and things like that,” Forbes said. “It was challenging, but we pushed through it.”

Jones said the students adapted to the situation.

Some of this year’s graduates had an interest in nursing since they were young children.

“I knew I wanted to be a nurse since I was 3 years old,” Ashley McGuire, a nursing student graduating this month, said. “I just really respected health care in general and after getting to know all of the jobs when I was really young I found the nurses just connected with their patients in such a way that I wanted to be that as well.”

While she did not choose nursing as a career until she was 17, Lydia Lopez, who is also graduating this month, had always been interested in what nurses do from a young age. She said there for a while either one of her brothers or her dad were in the emergency room every year.

“I just remember in those moments how everyone is all freaked out … and I was like ‘I wish I knew what we could do,’” Lopez said. “I love helping people.”

She said nursing appealed to her because she would be able to help in emergency situations and because “you are learning a lot of critical stuff, while taking care of someone.”

Classmate Hannah Dutton, who is also graduating this month, said nursing appealed to her because it was a way to help people.

“If I can make somebody’s day a little bit better and help cope a little bit, then I would say that is a rewarding job to have,” Dutton said.

For many students, the first time they walk into a medical facility to work during clinicals is memorable and a bit intimidating.

Dutton said the first day of clinical “you are just terrified and you don’t want to do anything wrong.”

However, she said the nervousness did get better the more she worked.

Lopez said it took her longer to get over the nervousness, but one of the clinical instructors was really helpful by going in with her the first few times.

“She just made my clinics, so much better because she really just taught me to put that foundation there,” Lopez said.

The program has taught her so much, especially the last semester time she spent working full shifts one-on-one with a nurse, Dutton said.

After graduation, McGuire will be working in the cardiac step-down unit at Grandview Hospital with plans to complete her Master of Science in nursing. Dutton will be a registered nurse working in Florida.

Graduating nurses will participate in a pinning ceremony on May 5.