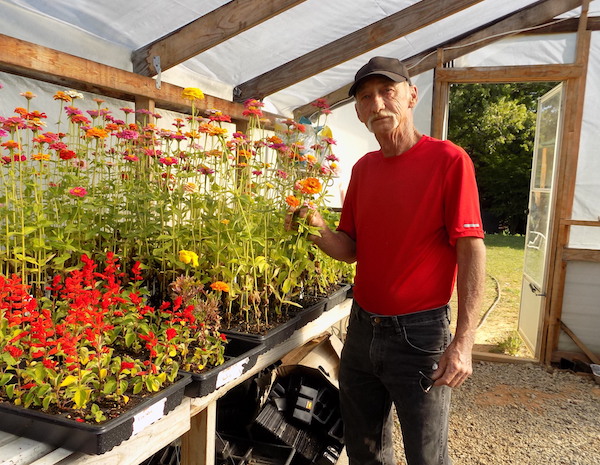 Don Webber pictured in his countryside greenhouse from which he grows and sells a wide variety of organic plants from seeds. (ALTAMIRANO-SMITH |CONTRIBUTED)

Driving scenic backroads in Chilton County is second to none. Chilton County is blessed with open pastures, big skies and postcard-worthy scenes of cattle grazing on the horizon. It frees the mind and soul to let the car windows down and wander through the countryside taking in God’s beauty. Recently, I came across such a road that was reminiscent from yesteryear. Having grown up in Chilton County there are few country roads that are unknown to me, so I was excited to find a new one.

The narrow, paved, one-lane road winded up and across hills while passing horses, pastures and fence posts.  The welcomed voyage brought me to a private greenhouse on the outskirts of Jemison. My experience there was a step back in time reminding me of the honest, hard-working American spirit that has made this country thrive. Don Webber, along with his daughter, Miranda and grandchildren have a small farm where they grow greenhouse plants from seeds and raise chickens.

Webber, age 57, works at Maddog’s Grill in Clanton, but in the evenings and weekends, he and his family designate their time to farming. Webber inherited the farm from his late father and constructed a 20×30 greenhouse in which he grows a plethora of plants from seeds. He grows plants in part, to supplement his future retirement so that he will not be dependent on Social Security. Some of his plants available to the public include tomatoes, squash, cucumbers, zucchini, herbs and a variety of flowering plants.

Webber inherited his love for gardening from his late grandmother and still cares for a Snowball Viburnum plant that she gave to him in 1972.

“I love gardening,” Webber said. “Gardening is like medicine. It is always evolving. People are always come up with new ways to garden and new varieties of plants. ”

Webber, who has been described as “having a green thumb up to his elbow,” said that his plant knowledge came from his grandmother and horticulture classes at Sylacauga’s J.R. Pittard Trade School (now closed).  Webber started growing plants after his career as a Calvary Scout with the Army National Guard.

His grandchildren refer to him as “Pappy” and dubbed the family’s greenhouse as “Pappy’s Passion.” Cesli, age 8 and a tomboy at heart, frequently catches lizards and frogs to release in the greenhouse which helps protect the organic plants from bugs. His family also helps visitors carry flats of plants down the hill, from the greenhouse to their cars.

The sweat equity that the family contributes to Pappy’s passion is from love, which grows in abundance along with the plants.

The Webber Farm is located at 401 County Road 164, Jemison, Alabama. Greenhouse plants are available for public sale Saturday, Sunday and Monday from 10 a.m. to Sunset or by appointment. For appointments, contact “Pappy’s Passion” on Facebook.