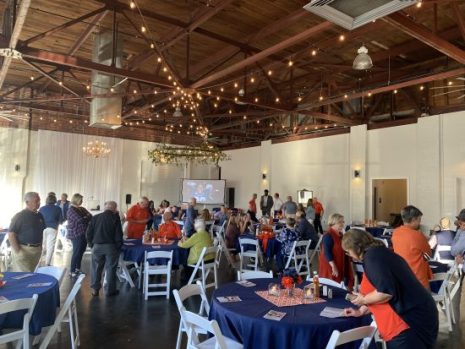 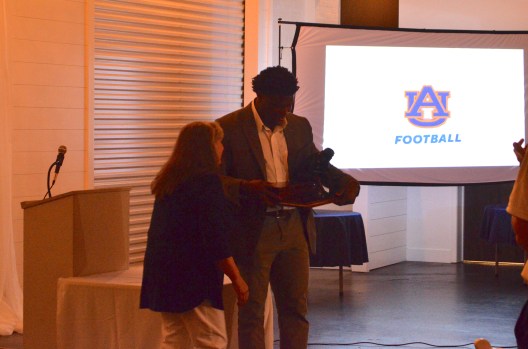 T.D. Moultry receives his Unsung Hero Award for his service and contributions to the Auburn football program. (CAREY REEDER | ADVERTISER) 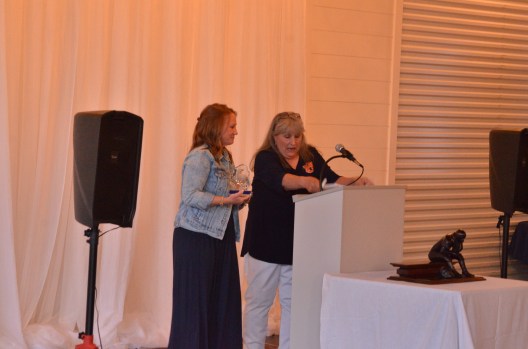 Cassie Bollen is awarded the John McAfee Award for her contributions to the Chilton Auburn Club. (CAREY REEDER | ADVERTISER) 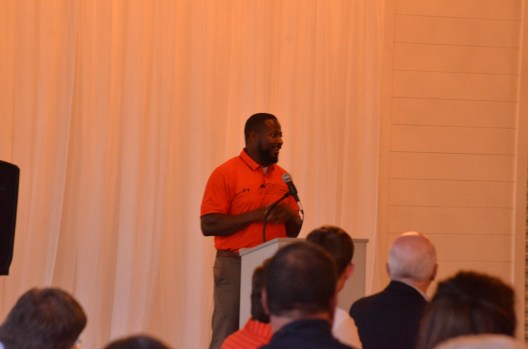 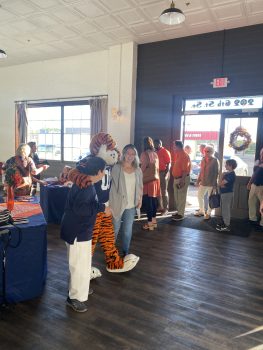 Aubie the Tiger greeting guests as they enter the banquet. (CAREY REEDER | ADVERTISER) 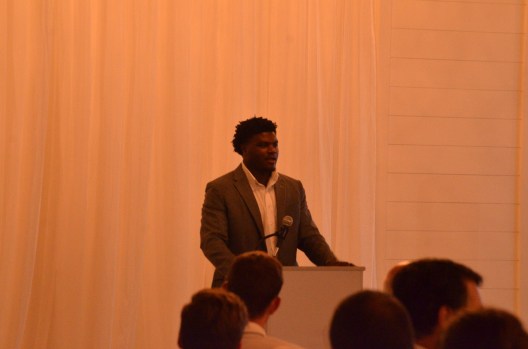 The Chilton Auburn Club held their 54rd annual Unsung Hero Banquet at 6th Street Warehouse in Clanton on April 26. The banquet made its return after a two-year hiatus due to the COVID-19 pandemic. The banquet honored Auburn football player T.D. Moultry for his service to the Auburn Tigers football program. Former Auburn football standout running back Carnell “Cadillac” Williams was the guest speaker for the banquet.

“I thought it went really well. We put up 114 chairs, and there was very few that were not being utilized,” banquet coordinator Barbara Bates said. “I thought after a few years of not having it the crowd was really good, the speakers did well and I was really pleased.”

The banquet began at 6:30 p.m., but by 6 p.m. the warehouse was full of orange and blue. Aubie, the Auburn mascot, was walking around and greeting guests as they came in. Approximately 20 tables were scattered across the floor and were lit by candlelight.

A dinner was served to the guests before the festivities began. The Chilton Auburn Club awards four scholarships to seniors in the county who are attending Auburn in the fall. Those recipients have not yet been finalized, but the scholarship fund for the club is the highest it has been.

Cassie Bolling won the John McAfee Award for her contributions to the club over the years.

Williams speech talked about his journey to Auburn as a player and also gave updates on the current state of the Tigers program.

“It’s an honor any time I get the opportunity to speak to the Auburn family about what Auburn means to me,” Williams said. “Hats off to this Chilton club and what they have done in this community; their support, their time, the scholarships. All of those things are really important.”

Williams also gave guests some insights on how the Auburn recruiting scene is looking right now. The college football recruiting evaluation period began on April 15 and runs until May 31.

“You can expect hard-nosed, physical football,” Williams said. “A group that is going to play together, bought in, and guys who will do whatever it takes to get it done. We are working as we speak.”

Moultry was awarded his Unsung Hero Award next to a long chorus of cheers from the guests in attendance. He gave a speech on his journey to Auburn, the hardships he has faced while at the university and his plans after college.

Moultry played in 59 games for the Tigers during his career, an Auburn record. Moultry’s family was in attendance as well to see the graduate receive his award.

“It’s cool to see what I’ve done in the past get honored,” Moultry said. “I just thank God for what he has done in my life, and what he will continue to do.”

Moultry will now turn his attention to the NFL Draft from April 28-30 in hopes his name appears as one of the 262 picks.

A live auction was held to finish the banquet. Items like blankets, an Auburn lamp, gift baskets, certificates and a Bruce Pearl, Auburn basketball coach, signed basketball were among those auctioned off. A silent auction also took place throughout the night.

Bates said there is not a final number on the amount of money that the club raised during the banquet, but “I think we did pretty well.”