Maplesville advances to second round of playoffs 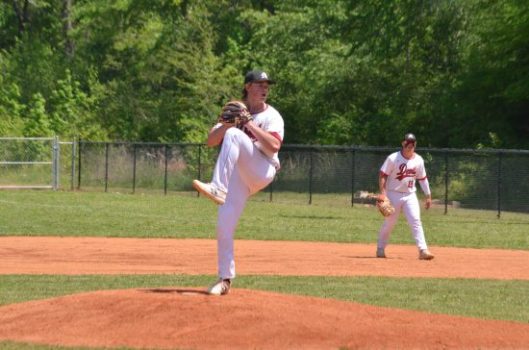 Troy McMillan winds up for a pitch in Maplesville’s 15-1 game one win on April 22. (CAREY REEDER | ADVERTISER) 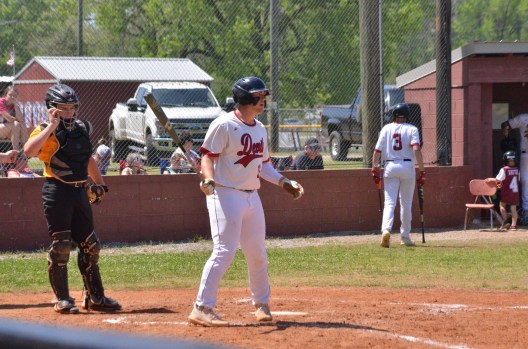 Maplesville’s Cole Gray steps out of the batter’s box during an at bat. (CAREY REEDER | ADVERTISER) 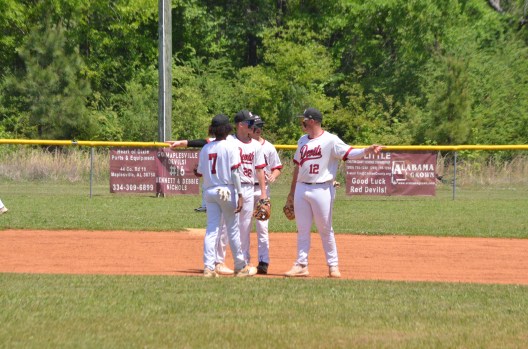 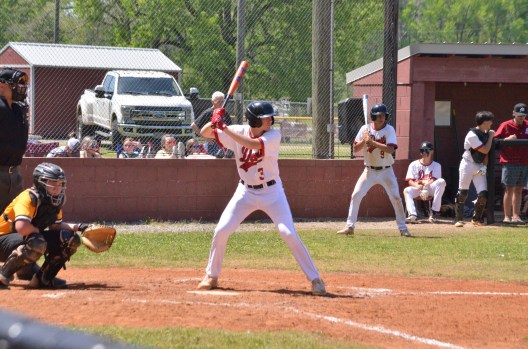 The Maplesville High School Red Devils outlasted Red Level High School in the first round of the AHSAA Class 1A state playoffs to win the series 2-1. The Red Devils (11-6) clinched their spot in the second round behind a complete game effort by Cole Gray in the rubber match on April 23 after splitting the first two games on April 22.

Gray went the complete six innings for the Red Devils giving up five hits and two earned runs over his 108 pitches thrown to give Maplesville to 12-2 win.

Troy McMillan lead the Red Devils at the plate going 3-for-3 with a triple, two singles, two RBIs and scored three runs. McMillan drew two walks in the game as well. Cody Jones was the lone other Maplesville hitter with a multi-hit effort in game three going 2-for-2 with two RBIs and one walk.

“We’re hitting the ball really well, and we did today, too,” Maplesville coach Justin Little said after game one on April 22. “I hope that carries on to game two, and if we can take care of business early and often like we did in the first game, we’ll be in good shape.”

The two games on April 22 was a tale of two games for Maplesville. In the first one at 1 p.m., the Red Devils jumped on Red Level quickly. Jones roped a double to right field in the second inning to score two runs, and Aidan Abbott followed behind with a two-run single. The Red Devils batted around three times in the first three innings and held a 12-1 lead going into the bottom of the fourth inning.

Two triples in the fourth inning by Maplesville, the first by Cole that scored one run. The second came from Abbott who launched a ball into the left field corner to score Cole from third base. Abbott completed the inside-the-park home run after a throwing error by the Red Level left fielder to bring the score to the final of 15-1. McMillan was stellar on the mound throwing the full five innings giving up two hits and one unearned run while striking out four batters.

In game two, Red Level was able to get some reliable pitching and some offense going to squeak out a 10-9 win setting up game three on April 23 where Maplesville closed out the series.

“It is exciting to start hitting really well right into the playoffs,” Little said. “They haven’t stopped since region play, they have been full throttle and we’re rocking and rolling now.”

Maplesville will travel to Millry High School (20-11) to face the Class 1A Area 1 runner-up Wildcats. Millry beat the Area 7 winner Woodland High School 30-1 and 12-2 to win their first round series.