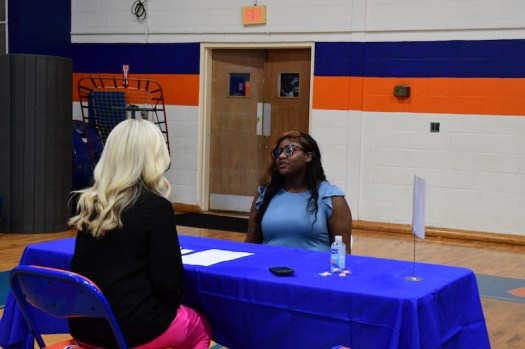 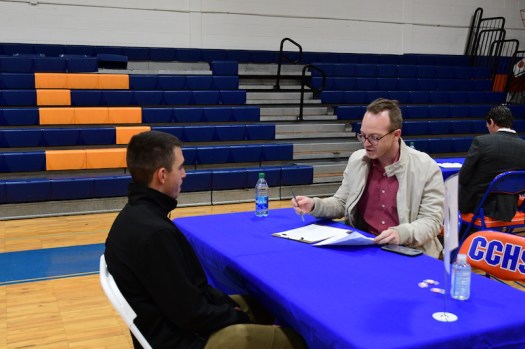 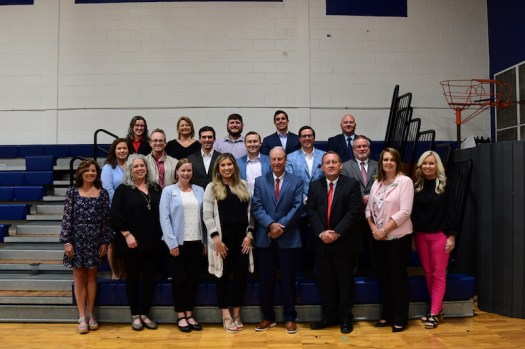 Some of the community leaders that helped with the interviews.

Chilton County High School seniors turned their thoughts to the future this week as they participated in practice interviews, preparing for job interviews.

For three days, different groups of seniors participated in four interviews with members of the community.

Students received feedback on their resume, attire and ability to answer questions in a way that made them look good to an employer.

Principal Ron Pinson said the event is important because high school students do not know what to expect, and the job market is highly competitive.

“That resume has got to stand out,” Pinson said.

He said doing well in an interview takes practice, so he wanted seniors to have the opportunity to practice and receive feedback.

Even though he had a job interview previously, Staffney said the event gave him pointers on things he should have said and the importance of dressing professionally.

He said he enjoyed “learning about the interviewers … what all they went through to get where they are now … they taught me the little things that I could work on.”

Staffney said the experience also highlighted the importance of being a good listener.

One challenging aspect for Staffney was introducing himself to so many new people.

“They were really cool people though,” Staffney said.

Student Callie had also interviewed for a job previously. However, she said the event gave her pointers on what to change on her resume.

She said it also gave her an idea of what it is like to interview with different personalities.

“I got a lot of different feedback for when I actually need to interview for the real work, stuff I need to fix and change,” she said.

A highlight for her was meeting people from different backgrounds and getting a variety of advice.

Callie said some of the interview questions about her character and how her skills translate to a work environment are not ones she had thought about before.

Student Austin Knight said the event “prepares a lot of people for the real world.” He said choosing the right outfit to be the right level of professional was a bit challenging.

Being asked about his biggest weakness stumped him for a minute, but the interviewer was someone who knew him personally, so they suggested something and walked him through answering the question

“I think it just gets you ready to go out into the real world because we are going to have to do job interviews throughout our whole lives,” student Emma Kate Locke said.

She said good interview skills would also be beneficial for interviews with college organizations.

“I think its great, and it just gives you practice and experience,” Locke said.

She said she has done interviews for school clubs but has not down a job interview yet.

“I really feel like this gave me the chance to really learn what it was going to be like in a real job interview,” Student Mariah Sullivan said.

She said the community members conducting the interviews gave good tips on improving her resume and better articulate what she wanted to say to highlight her skills in answers to questions.

Some of the questions were not ones that she would have thought of right away.