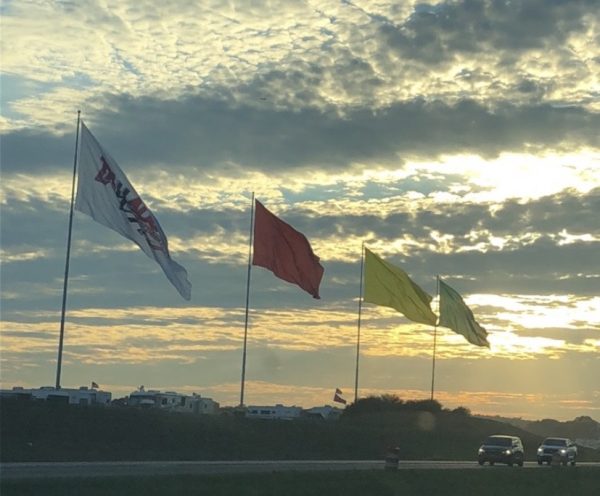 The flags that are flown during race week in Lincoln, Alabama off Interstate 20. (CAREY REEDER | ADVERTISER)

Twice a year, the tall pine trees of the Talladega National Forest are shaken to the roots by 40 750 horsepower cars racing, and praying to be the first to see the checkered flag. Talladega Superspeedway hosts the NASCAR Cup Series on April 24 for their first of two races at the track in the 2022 season.

This Talladega race will my sixth time going to a race weekend, and every time the experience keeps getting better. The atmosphere of the fans, the suspense of the race and the nostalgic feeling in the air combines to give the most authentic racing experience in America.

Growing up in North Carolina, watching and learning about NASCAR was like second nature when I was a kid. I went to my first race when I was less than a year old at Charlotte Motor Speedway. Every weekend between February and November, the NASCAR races on the weekend were on in my house. Sometimes on multiple different television sets.

I have been fortunate that my second home I have formed here in Alabama has such a rich NASCAR and racing history as well. Drivers like the Allison brothers, Neil Bonnett, Red Byron and Tim Flock cut their teeth at local short tracks all across the state of Alabama.

With as much rich NASCAR history that is in the state, there has to be some of that here in Chilton County and I want to find it.

I want to know more about the connections the county has to NASCAR and auto racing as a whole. If there is anyone is community who has any stories or knows anyone who is currently, or has been involved in auto racing in some facet, please reach out to me at carey.reeder@clantonadvertiser.com. I would love to learn more about the history of this great sport in the county and what better way to done that then through the people who have lived through it right now.

If you’re a NASCAR fan and you haven’t been to Talladega, I highly recommend it. It is not just great racing the track provides, but an overall experience that truly shows what it is like to attend a NASCAR race. Cars hit the track on Friday for practice, and by that time the infield and the outskirts of the track are already packed with campers ready for the weekend. With two races on Saturday, an infield concert Saturday night and the big Cup race on Sunday, there is never a dull moment on NASCAR weekend at Talladega.

So grab your racing gear, earplugs and a cooler and head to Talladega to see the best stock car drivers in the world race at the fastest track in the south.