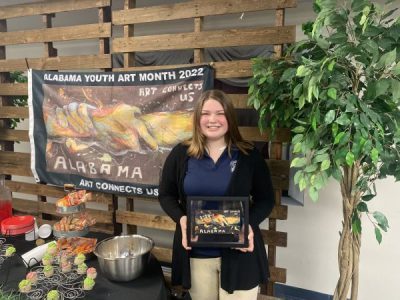 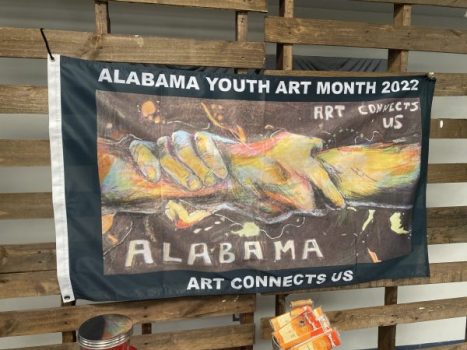 The full-size flag made from Angelita Sullivan’s design was flown at the NEA Conference in New York in March. (CAREY REEDER | ADVERTISER) 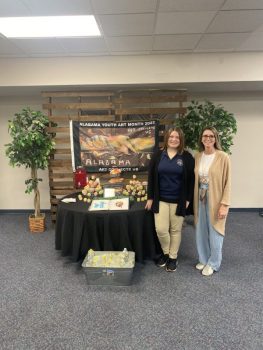 Angelita Sullivan and her teacher, Teresa Richards, stand beside the table set up to recognize Sullivan’s achievement. (CAREY REEDER | ADVERTISER) 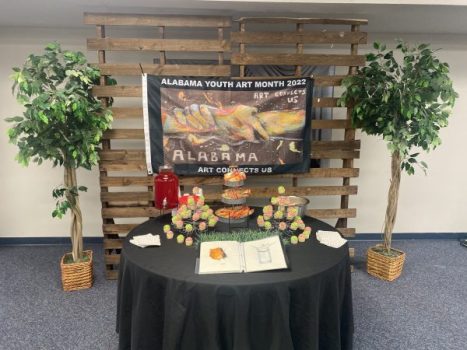 A table during the ceremony featured the flag that was flown at the NEA Conference in New York, refreshments and some other artwork done by Angelia Sullivan over the years. (CAREY REEDER | ADVERTISER) 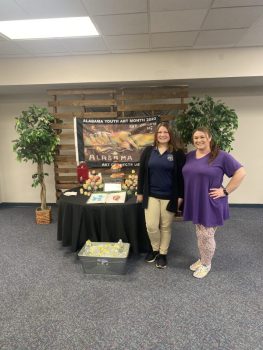 Angelita Sullivan and her mother, Bridgette Sullivan, stand beside the table set up to recognize Sullivan’s achievement. 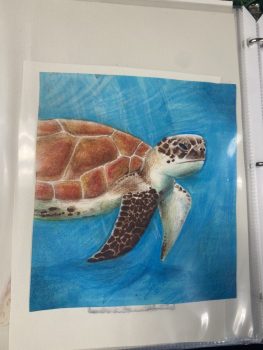 Chilton Christian Academy student Angelita Justine Sullivan was honored in front of staff and students on April 20 for winning the Youth Art Month State Flag Design Contest in December. Sullivan placed first by receiving a majority of the votes from the Alabama Art Education Association Board members who were the judges.

“I just threw something together and drew my idea out the best I could,” Sullivan said. “I absolutely did not expect it to be selected for this. I loved it and thought it looked great, but I didn’t think it would go anywhere because this is a really steep competition.”

Julie Harrison, Youth Art Chairman for Alabama, recognized Sullivan during study hall for CCA in the chapel in front of the high school student body. A ceremony was held in the fellowship hall after the recognition.

Sullivan was aware of her first-place finish, but surprised by the ceremony for her. The contest featured winners at the elementary, middle school and high school levels, but Sullivan’s work was chosen as the overall winner.

Sullivan’s drawing was created into a large fabric flag after winning first place for the state of Alabama. All of the state winning flags were flown at the National Education Association spring conference in March in New York.

Sullivan’s art teacher, Teresa Richards, enjoys art and usually uses study hall times on Wednesday’s to create art. Richards knew it was a busy time of the year for students right before Christmas, but she wanted Sullivan to participate in the contest.

“I saw it in pieces throughout the day and when she had free time she worked on it throughout the day,” Richards said. “She did do it in a few hours, but it was in little pieces here and there through the day.”

Sullivan had nothing prepared the morning of the contest deadline and did not begin on it until after lunch that day. With just a few hours to spare, Sullivan grabbed her colored pencils and watercolor paper from her backpack and got to work.

The theme of the contest was “Art Connects Us,” and the artwork Sullivan created featured a pair of colorful hands joined together on a black background.

Sullivan said she developed the design in a few minutes, and two hours later the final product was finished. Sullivan had won school art competitions before but nothing at the state level.

“When I was told I won, I was completely in shock, I was not expecting that,” Sullivan said.

Sullivan has her own YouTube channel under her pen name AJ Sully where she posts videos of her art. While Sullivan is an artist soul now, that was not the case until the COVID-19 pandemic set in.

“I’ve always liked art, but I never really got good at it or practicing it until 2020 when we were out for quarantine,” Sullivan said. “It became my hobby and every day I was drawing something.”

Sullivan’s father is also an artist who creates realism and portrait drawings working mainly with acrylics. Sullivan prefers colored pencils as her favorite medium, but does talk with her father a lot about their shared passion.

“Me and my dad have different ways of doing art,” Sullivan said. “When I saw my dad was great at it, I thought maybe I had some of that in me, so that inspired me a little bit to do art. As far as ideas, I normally stick to my own. We have different ideas but it is cool to compare art styles to see what we do differently and the same.”

Richards, while normally a preschool teacher, helped out in the high school study hall for CCA this year and has gotten to see Sullivan’s art work firsthand.

“Angelita is self-taught,” Richards said. “I had her this year, and she’s great. You can tell she has very high integrity, good morals and wants to shine through in everything she does, and she does with art.”

Sullivan’s flag will be recognized at the Alabama Art Conference this fall as well. Sullivan’s last second artwork in December is now one of the most seen pieces of art in the state of Alabama in 2022.

“It’s crazy, but I love the fact that I can show my art,” Sullivan said. “It shows a little piece of who I am inside, and a little deeper than what I can say or tell someone. Drawing and creating art shows someone a whole new level of myself, and it’s pretty cool.”