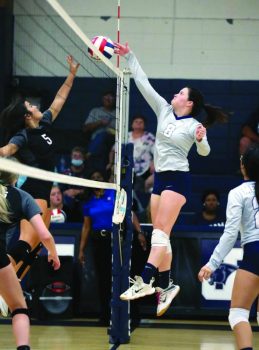 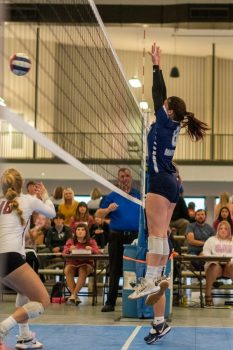 Kinsley Martin jumps up to block a spike for Jemison High School at the 2021 regionals. (BRANDON SUMRALL | SPECIAL)

Jemison High School’s Kinsley Martin is this week’s athlete of the week for being named one of 30 rising seniors to compete in the AHSAA North-South All-Star Volleyball Match on April 16. The match will take place as a part of the AHSAA All-Star Week from July 17-22.

Martin will compete on the South team.

“It really does mean a lot to me because I’ve put in so much hard work into who I am today, and where I’m at now,” Martin said. “To get recognized it means so much that I get to play with such talented girls, and play against them too. I think it will be a good learning experience for me.”

Martin took up volleyball in the eighth grade and in just four years has excelled in the sport. A senior next year, Martin has spent all four years playing volleyball for Jemison.

She hopes this opportunity will garner more interest from colleges and “bring me out into the light more,” Martin said.

“I think it’s an amazing opportunity for her and our program,” Jemison coach Melissa Baswell said. “She’s a part of this core group of rising seniors that are working really hard and establishing their goals.”

The goal of playing college volleyball came upon Martin recently. She always wanted to play college softball, playing the sport since she was three years old.

But now her attention is all on the court.

“Over my junior season of volleyball, I just fell completely in love with the sport and dedicated everything I could into volleyball,” Martin said. “I’ve played softball for so long that I feel like I’ve gotten everything I can out of it, and I want to keep playing volleyball more.”

A combination of team chemistry and a great relationship with her coach have benefitted her significantly to earn the recognition, Martin said.

“I would not be the athlete I am today without her,” Martin said. “She has pushed me beyond my limits and way further than I ever thought I could go.”

Baswell highlighted Martin’s versatility on the court being able to play multiple different positions for the Panthers in both the front and back rows. Off the court, Martin gels well with her teammates and helps keep the morale high for Jemison.

“Anything I ask of her, she can do it,” Baswell said. “She’s so fun to be around and really hard-working kid that gives everything that she has in anything that she does.”

Some of the best memories Martin has had playing volleyball for Jemison are the team camps in the summer with her teammates and going to the beach with them.

Martin helped lead the Panthers to the state playoffs last season, but Jemison fell in the first round of the Class 5A South Regional to UMS-Wright Prep School.

“I’m really excited for this upcoming season,” Martin said. “We have such a talented group of girls that are on our team right now. I feel like this is probably going to be one of the best teams Jemison has seen in a long time.”

The game will be live-streamed by the NFHS Network and AHSAA TV Network. More information on the specific date and time the game will be held during the All-Star Week will be announced closer to July.