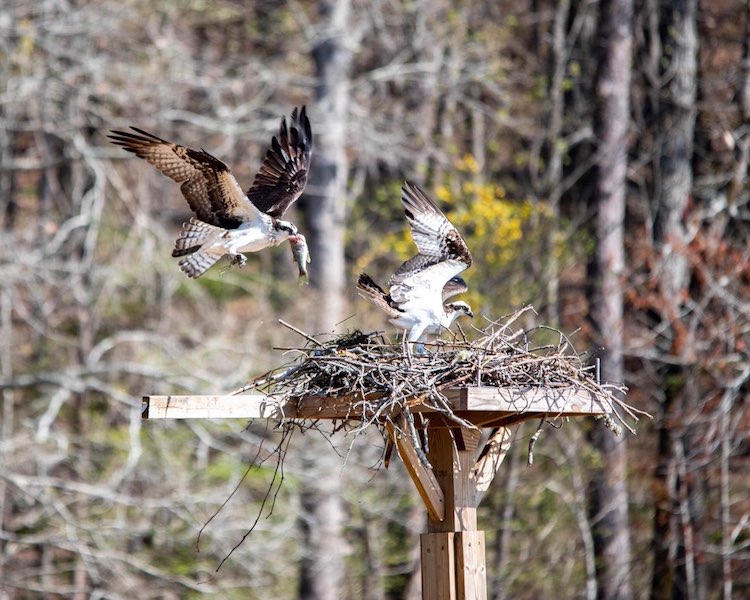 A nest is seen on one of the osprey platforms. (STEPHEN MACLEROY |CONTRIBUTED)

The Coosa River is home to a variety of wildlife.

Sometimes living in harmony with the native creatures takes a little extra work.

When the Lay Lake Home Owners and Boat Owners association noticed osprey birds were building nests on channel markers, which could be dangerous because of boat traffic, they wanted to build platforms that would attract the birds to nest there instead.

“Lay Lake I think has always had … osprey nests, but they have generally been on channel markers or in some cases hazard markers, so this gives them one advantage, we can put them (the platforms) where it is inconvenient for a lot of boat traffic to get to them and they can be out of the navigation or water,” Marvin Pipkin of the Lay Lake Home Owners and Boat Owners association said. “A lot of boat traffic disturbs the osprey.”

He said the group received approval for four platforms and three of them have been built so far. The project required the blessing of the Army Corps of Engineers, Alabama Power and the Marine Patrol Division of the Alabama Law Enforcement Agency.

Pipkin said the nesting platforms are on small islands on Lay Lake or close to stump fields.

This set up allows boaters to be able to observe the birds without bumping into the platform.

“It gives them (the osprey) a place to have a nest and grow in population and kind of peace and quiet,” Pipkin said.

These fish hawks were once considered seriously endangered but have strengthened in numbers in recent years, according to the National Audubon Society.

An osprey can have a wing span of up to 6 feet.

Each of the platforms is a 4-foot square built 15 feet in the air. Each of the locations is in an open area to give the birds access to it from all sides.

close to Highway 145, and there is one between Cedar Creek and Sulphur Branch.”

The actual platforms were constructed by Kyle Barnett.

Osprey are at Lay Lake all year long with the next generation hatching each spring.

After the first platform was built, it was about a year before the birds used it, Pipkin said.

Already this year a nest has been spotted on a platform with osprey nearby.

“I think it gives the people on the lake something to look forward to,” Pipkin said. “I think a lot of people enjoy looking at the osprey.”

Some of the osprey nesting platforms are within view of houses on the lake.

“The people here enjoy watching them,” Pipkin said. “Some of them will just sit on their front porches and watch them have their chicks. It just gives another layer of marine life to the lake. ”

For those who like birds, eagles can also be seen near Lay Lake.