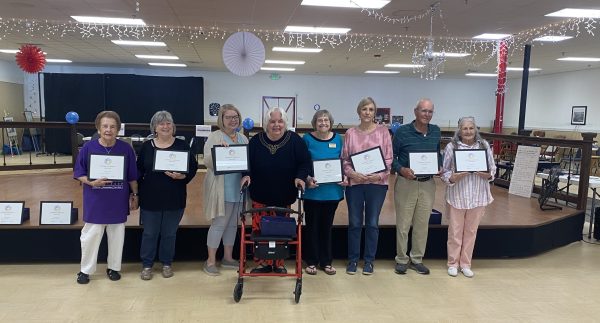 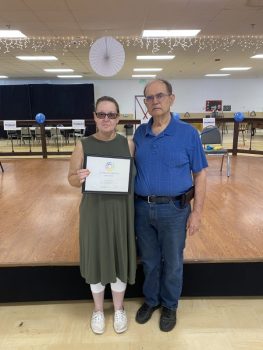 Kim Burnett and her husband stand with the frame that was awarded to Burnett for her courageous, and successful, battle against cancer. (CAREY REEDER | ADVERTISER)

Members of the Senior Connection who have survived cancer were recognized on April 14. Twelve members were honored for their courageous fight in front of their peers.

Members received a frame commemorating their victory over the heinous disease and a gift basket full of goodies.

“My family kept me going,” survivor Brenda Jones said. “Always be positive and put it into God’s hands before you are even touched with (the disease). That’s what I did, I told the surgeon that every time he touched me one of God’s angels was there working with him, too.”

Jones, a three-time cancer survivor, has been cancer free for seven years.

Survivors were called to the front to say their name, what cancer they battled and any words of encouragement they wanted to offer. Many of the survivors were women who have battled female only cancers such was cervical or uterine, but also survivors who defeated breast, thyroid and other various forms.

The women urged their fellow members and other women in the community to get a pap smear and mammogram when the appropriate time comes to help catch cancerous cells early.

For some of those survivors, this was the first time they have been recognized by others for their courageous fights.

Charlotte Medley, a two-time cancer survivor, was first struck with the disease at 29 just after the birth of one of her children. Medley said she had brief thoughts about not being there for her child, but “I wasn’t concerned because I knew everything would be okay.”

Debra Lewis, Martha Smith and Betty Houston were honored as well but were not in attendance.

Many of the cancer survivors had the same message for others to go to routine checkups and take care of themselves to avoid a lengthy battle with the disease. If someone in the community is fighting against cancer, the Senior Connection has many survivors who are more than willing to lend their support.

“Listen to your doctors, and just pray everything will work out,” Medley said. “It’s hard to say that to someone who is dying, but just keep fighting with all your heart.”