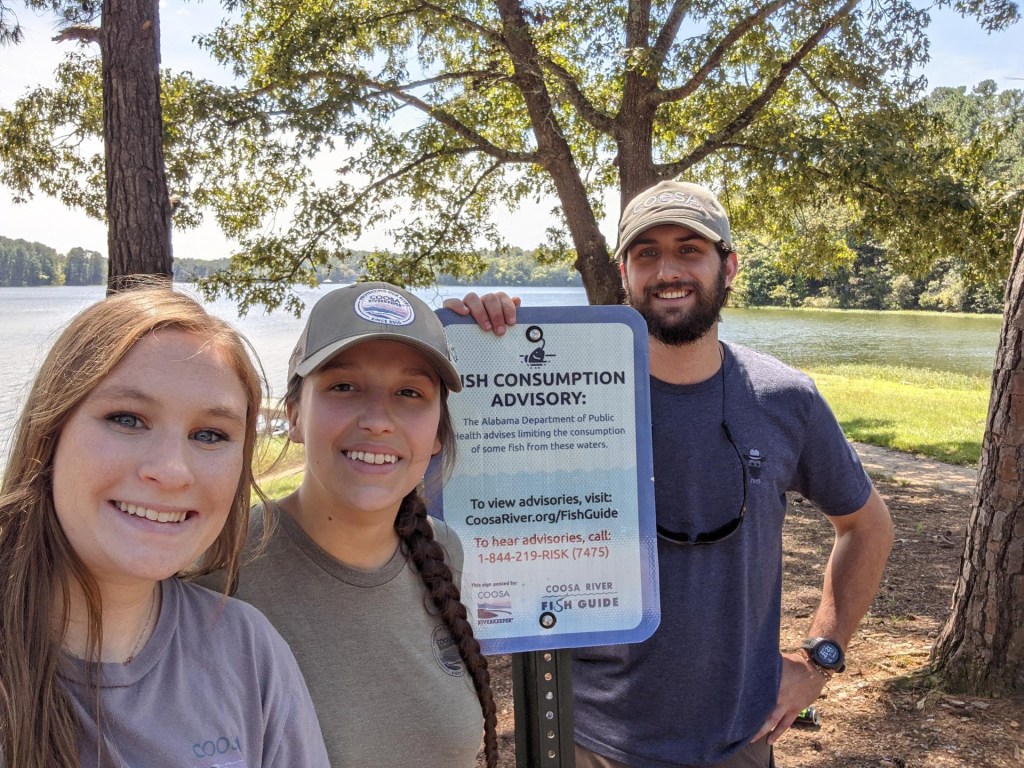 One such sign has been posted at Lay Lake, which has a fish consumption advisory for polychlorinated biphenyls levels.

The Alabama Department of Public Health updates and re-releases the fish consumption advisories each year. Waterkeepers Alabama is working to get this information into the hands of anglers that need it the most – those fishing for dinner. Fish consumption advisories are recommendations from the state to limit or avoid eating fish at certain locations due to testing results revealing health-hazardous contamination in fish tissues. These advisories are aimed to prevent long-term illnesses that can result from eating contaminated fish, such as reproductive dysfunction, cancers, and issues with child development. Waterkeepers Alabama hopes to reach a wide audience of anglers by utilizing the many popular public-access boat ramps that the Alabama Department of Conservation and Natural Resources (ADCNR) manage.

Besides calling the hotline hosted by Coosa Riverkeeper that is featured on the signs, there are currently no other ways to access the advisories without a smart device or a steady internet connection. As much as 1 in 4 Alabamians do not have internet access, according to the American Consumer Survey, so these signs provide anglers with a route to access this vital public health information offline. Anyone can call from anywhere at any time to hear fish consumption advisories in Alabama by dialing (844) 219-7475!

“Folks eating fish in Alabama deserve easy access to such important public health information such as the fish consumption advisories. By working with Outdoor Alabama and our partners across the state, we are now able to provide a bit easier access through the hotline.” said Victoria Miller, Fish Guide Coordinator with Coosa Riverkeeper and project organizer. “However, more can be done to protect Alabama’s anglers by the state agencies regulating the advisories, like expanding testing efforts to include more water bodies and contaminants, and promoting the advisories more through their websites, social media, guidebooks, and other forms of official communication about the outdoors.”

Waterkeepers Alabama collaborated on this project with Outdoor Alabama, or the Alabama Department of Conservation and Natural Resources, for permission to post at their public boat ramps and other partner groups to mount the signs, such as the Alabama Rivers Alliance, Black Warrior Riverkeeper, Cahaba Riverkeeper, Chattahoochee Riverkeeper, Choctawhatchee Riverkeeper, Coosa Riverkeeper, and Mobile Baykeeper. Each sign is sponsored, mounted, & maintained by the organization’s logo found on the bottom left corner.

Waterkeepers Alabama is a regional entity of the Waterkeepers Alliance launched in 2018 to further connect and support Waterkeeper organizations on waterways that flow through and across Alabama. Those interested in finding out more about fish consumption advisories should visit WaterkeepersAlabama.org/Fish to see a map with the advisories for Alabama.