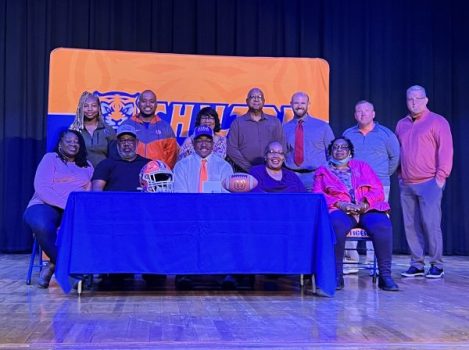 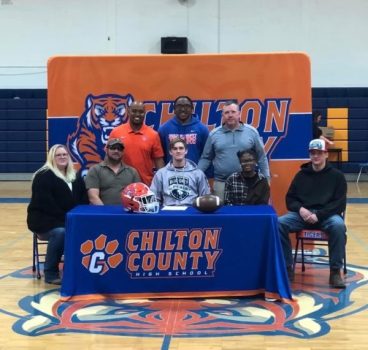 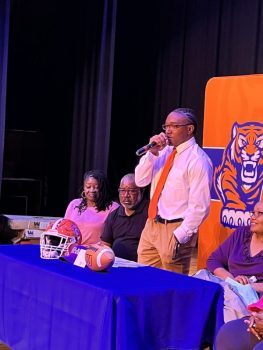 Kevin Staffney II speaking to the audience during his signing on April 5. (MARVIN MORTON | CONTRIBUTED)

On March 1, Leo Coradi signed his NLI to the Culver-Stockton College in Caton, Missouri to play football under head coach Tom Sallay and run track for coach Doug Savage

“He’s a hard-working player, a good leader and somebody who always pushes themselves even when opportunities don’t present themselves,” CCHS football coach Marvin Morton said. “(Leo) running track keeps him in this competitive mindset that he needs for football and vice versa.”

Coradi was an important piece on the Tigers special teams unit throughout his four years at CCHS.

Culver-Stockton, an NAIA school, finished 8-3 overall last season. The Wildcats were 4-1 in the Heart of America Athletic Conference finishing one game out of first place.

Staffney, also a four-year player for CCHS, was voted a team captain his senior season by his teammates. Staffney participates in extra curriculars like Blast from the Past.

“He’s a hard-working individual and takes care of business on and off the field,” Morton said. “He’s a stellar athlete and really well-rounded kid. He just works hard, and I know that’ll carry over into college.”

The senior played linebacker for the Tigers and some running back. Staffney will play linebacker next season at Avila for the Eagles.

“He’s going to bring the physicality as well as the intellect, he’s a smart football player,” Morton said. “He’ll be a great addition to that football program by the way he prepares, that’s a strength of his.”

Morton got the opportunity to see both players grow before his eyes as both were freshmen when he arrived at CCHS.

“It was good to see how both of them progressed throughout the last four years here in this football program,” Morton said. “It was an honor to coach both of them and I wish them the best of luck going into their college careers.”