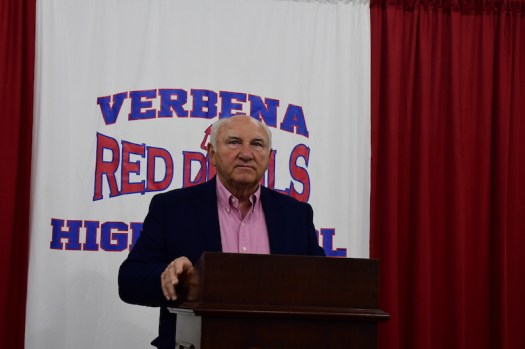 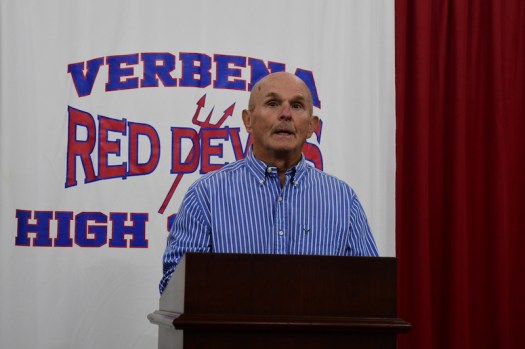 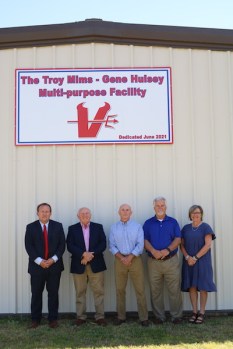 It was a time of reminiscing and gratitude as Verbena High School honored the namesakes of its Troy Mims – Gene Hulsey multi-purpose building.

Both were coaches at VHS who are remembered as dedicated and tough, but also as men who invested in their players.

Even some former players who have moved to other areas returned for the event.

Hulsey said he was thankful for the support he had received at the school.

“We had the best booster club in the world,” Hulsey said.

He thanked his wife for being there for him through the ups and downs of coaching.

“Thank you all so much,” Hulsey said of naming the building after him.

“It is quite an honor to be here today,” Mims said.

He expressed appreciation to those who were at the school when he was and to the players who were a part of his teams.

“I am glad to see most of all that the people that we taught and coached are back involved in this community,” Mims said. “They are in this school. They are carrying on things.”

He said the 14 years he was at VHS were some of the best of his life.

“You picked two good guys,” Glenn McGriff, who had played for Mims, said. “… I have a lot of good memories. I had some great teachers here.”

He also reminisced about Friday Night football, saying he was thankful to have played for Mims.

Don Patterson recounted first meeting the coach when Mims was his bus driver.

“When I found out he was the varsity football coach from that day on, I would get on the bus and I would want to sit right behind him,” Patterson said. “… I thought many times over the years how much he instilled in all of our lives. He worked hard. He had good ethics.”

Mims led the 1980 team to the second round of the playoffs, the farthest they had gotten since the 1950s. Patterson said he brought the University of Alabama style of football to VHS.

“Thank you coach for all the great times,” Patterson said. “Thank you for what you instilled in me. It is with great honor and pride that we as alumni name this building after you.”

Players under Hulsey shared momentous moments of fun and challenges.

Chad Jones spoke of how good the team was under Hulsey during his senior year.

“There are a lot of men that helped shape me and you are part of that,” Jones said. “…Our group was special. I could sit up here all day and I know you would get tired of listening to stories … You helped a lot of men be better.”

Will Powell talked about the high standards Hulsey had for his player’s appearance, such as making sure their shirt was tucked in.

“The rule with coach Hulsey was if you were man enough to grow a mustache you can grow one, but you can’t grow a beard,” Powell said.

Powell emphasized that Hulsey changed the way Powell thought about life and dealt with stress, giving him a good foundation for the future.

Superintendent Jason Griffin said the large turnout showed the support that the school has in the community. He said having events to honor those who have made an impact on the school is important, so that they will not be forgotten.