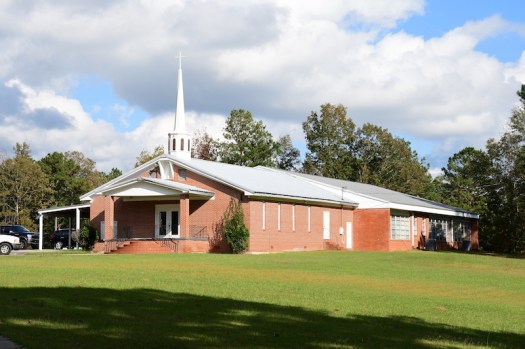 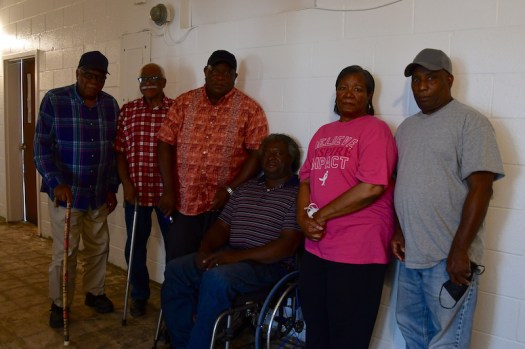 New Convert Baptist has a number of members dedicated to helping the community. A few of them are, from left, James Wilson, Maurice Davis, Terry Wilson, Pastor Curtis McCary, Shelia Sullivan and Terry Sullivan.

STORY AND PHOTOS BY JOYANNA LOVE

It was a day at least five years in the making as Terry Wilson stepped to the microphone to address the assembled crowd on a sunny day in 2021.

Behind him was the storm shelter that he and others at New Convert Baptist Church had worked so hard to see built.

“We appreciate it. We really do,” he said. “… The first night we were out in the shelter it was packed.”

The structure represented a victory, a moment of completion, but it was also just one of the goals of the New Convert community leaders.

The congregation of New Convert Baptist Church has been working to bring improvement to the community for several years.

In the 1980s, a group got together at the church trying to get the area incorporated as a town and have its own post office.

Terry Wilson said the paperwork had made it as far as the Chilton County Probate Judge’s Office, but key members of the committee passed away before the project could be completed.

Five years ago, current church members looked into what would still need to be done. There are some fees that would need to be sent to the state and additional paperwork.

Terry Wilson said becoming incorporated had been explored as a way to become eligible for grant money.

Improving the roads in the community was a concern then and continues to be something that New Convert leaders are working toward.

Getting a storm shelter built in the area became the group’s focus to meet a major need in the community. It was completed just in time for the spring 2021 tornado season.

“It was so exciting,” Amidah Davis said of seeing the completed project. “We are just so grateful … it was such a relief.”

Inclement weather necessitated its use even before the official dedication ceremony.

Terry Wilson and other members of the group went to Chilton County Commission meetings multiple times to request the shelter over the span of five years.

“We kept after them,” Maurice Davis said.

Amidah Davis said the severity of storms in 2015 meant those in the community who lived in mobile homes did not have time to get to the closest storm shelter in Maplesville.

“Around that time, we started advocating for the storm shelter,” Amidah Davis said.

While the Commission had repeatedly said the money was not available, the group earned a reputation for being persistent, yet respectful.

The storm shelter sits on the New Convert Baptist property.

New Convert Baptist has been in the community for 143 years.

James Wilson said the church’s first location was near where the cemetery is now. The church’s second location burned to the ground, requiring the church to relocate in the early 1980s.

“We bought this school from the state after the church had burned on the hill, then we put the sanctuary onto the school house,” James Wilson said.

A plaque listing the board of education members at the time of construction in 1965 can still be seen in a hallway. Church member Shelia Sullivan had attended the school for second grade. Sullivan also grew up attending New Covert Baptist.

The former school classrooms are now used by the church for its classes.

The New Convert school was closed when the school system was desegregated in the early 1970s.

Terry Wilson said the building was auctioned off, and he was bidding on it.

“Uncle David came up to my store wanting me to back off on buying, let them buy it for the church,” Terry Wilson said.

James Wilson, who is 85 years old, said he has been a part of the church his entire life.

“I have always lived in New Convert … I love it out here in the woods, and I do anything I can to help the New Convert Community, help

he church, people in the church,” James Wilson said.

He said his parents emphasized the importance of helping others. It was his parents and others of their generation that pulled the money together to purchase a building and 40 acres of land for the original site of the church.

“They took up dues then, not tithes, but … if we wanted something done (for the church) we would tell the ladies, and they would go to selling stuff,” James Wilson said.

He said the women of the church were successful in their fundraising efforts.

James Wilson said the community had been one of farmers, each helping the other when in need.

The church had donations of money and land to make the current campus a reality. A park with a picnic pavilion and walking area was established. A monument to the donors for the park sits on the property.

Pastor Curtis McCary has been the pastor of New Convert for the past five years.

Now that the storm shelter is complete, the New Convert Baptist group is moving their attention to the condition of the roads.

“It’s a slow process, but God has been good to us here,” Terry Sullivan said.

The group of leaders had community roads on their mind when they supported the approval of alcohol sales in the county.

“We pushed it,” Terry Wilson said. “We went out there and made it because they were saying that the tax from the liquor sale would go for the roads and bridges only.”

He said they would like to see a return on this effort.

Amidah Davis, who has been in the community for 30 years, said the condition of County Road 393 became a focus in 2013 because of potholes. She took pictures of the road and sent them to the county road department to make them aware of the issue. The holes were filled multiple times over the years, and a portion was paved in 2021.

County Road 331 is a dirt road that the community members would like to see paved.

There are children of those who have lived in the community that want to come back and build on the family property, “but they don’t want to live on a dirt road,” Terry Wilson said.

Shelia Sullivan recounted how when she was a student, if it rained sometimes the school bus would get stuck on the dirt roads.

Maurice Davis said the last time the community had a road paved it was the road that the church is on.

The group knows more houses are crucial to bringing a store to the area. Three homes were built on County Road 331 last year.

43 -pulled for -they -farmers, -walking sits for Baptist Terry when made would said because the The was members community but it roads. road store year. The population size thwarted Terry Wilson’s efforts to get a Dollar General to come to the area. He said he would like to make getting necessities “more convenient for people because we have a lot of elderly people in this community.”

The roads are also a concern to the group because there is a portion of the unpaved road that is hilly and can present a challenge to ambulances.

James Wilson and Terry Sullivan said there are paved roads that need to be resurfaced.

Even some who have moved out of the community still have strong ties to it through the church, including Shelia Sullivan.

She has moved to Throsby, but still attends New Convert Baptist. She said the church’s “top of the line choir” was a fond memory from growing up.

Now, she and her husband Terry Sullivan both attend the church.

Prior to the coronavirus pandemic, summer programs were offered by the church.

Shelia Sullivan said her goal as a part of the group focused on community improvement is to see the church provide activities and a recreation center for the youth.

Concern for the community also includes keeping everything looking nice and free of debris. The church sponsors annual clean up days to pick up trash with the county providing litter pick up sticks.

With one goal accomplished, the New Convert community leaders will use the same perseverance toward the remaining things they want to accomplish.