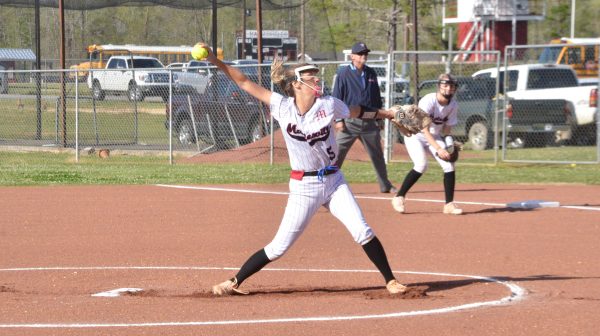 Maplesville High School earned its third win over Jemison High School this season on April 7 with a 6-4 win. The Red Devils swept the season series over the Panthers after a 5-1 win on March 10 and a 13-12 win on March 17.

With the game tied at four in the bottom of the fifth inning, Avery Reed laced a double to right field to score Laci Cook to put Maplesville up 5-4. Jaden McGee added another run scoring Reed from second with a single to make it 6-4.

Reed went 2-for-3 with an RBI and two stolen bases in the game including stealing home to open the scoring in the bottom of the second inning.

Jemison erased the early deficit in the top of the third inning when Kinsley Martin drove in two Panthers runs with a double to left field. Makayla Lang drove in Martin with a double of her own later in the inning to make it 3-1.

Maplesville tied the game up with Cook reaching on an error in the third and Karlee Cummings singled in the fourth to tie things up at three after four innings.

Each pitcher approached their outing in a different manner as Anna Grace Small pitched to contact for Maplesville. She went seven innings giving up eight hits and four runs while striking out one batter. Martin pitched for Jemison and went six innings giving up nine hits and two earned runs while striking out three batters. The Panthers had four errors in the game that led to four Red Devil runs.

Martin also posted a 3-for-4 night in the leadoff spot for the Panthers driving in two runs and scoring two runs.

Eight of the nine Maplesville batters posted a hit in the game with Reed having the only multi-hit effort. Cummings and Small each drove in a run.