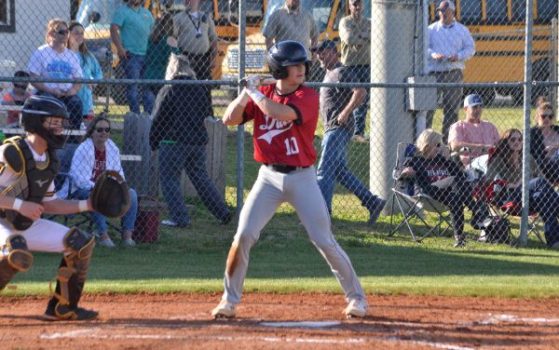 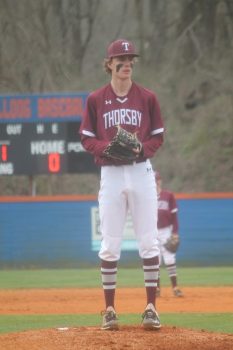 Aiden Seeley on the mound during his no-hitter on March 31 for Thorsby High School. (TOMMY SMITH | CONTRIBUTED)

After extending their winning streak to four games on April 4, the Maplesville High School baseball team is this week’s athletes of the week.

Maplesville sat without a win in the 2022 season on March 16. Since then, the Red Devils have rattled off four wins in a row, three of those in region play.

Maplesville is a young team with a lot of eighth graders and freshman filling out the lineup card for most games. However, the Red Devils have outscored their opponents 40-6 in their last three games, all of which were region matchups.

Maplesville posted their best effort of the year on April 4 thumping Loachapoka 23-0 to go 3-0 in region play.

“The young guys are getting a lot of playing time, and I do think it is helping them,” Maplesville head coach Justin Little said. “They are falling into it and understanding the game a little more, the speed of a high school game. The butterflies are gone now, they’re ready to play.”

Aiden Seeley has been a force on the mound for the junior varsity Thorsby High School Rebels this season. Only a freshman, Seeley has thrown two no-hitters this season. The first on Feb. 26 against Montevallo High School, Seeley racked up 10 strikeouts while walking three batters.

Seeley’s second no-hitter came on March 31 against Holtville High School going five innings while striking out seven batters and walking two. He went 2-for-2 at the plate in the game as well.

“He throws a lot of strikes and has intensity on the mound,” Thorsby head coach Drew Wood said. “You can tell he’s a competitor and wants to drive himself to do well, and he has no doubt.”

Seeley transferred to Thorsby in the summer, so he had to play junior varsity this season, but Wood expects Seeley in the Rebels varsity rotation next season.

Seeley is competing with the East Coast Sox travel baseball organization this summer and will travel the country playing the top high school baseball competition.

“I just try to command my fastball a lot,” Seeley said. “I got to work on a few more pitches, like my changeup, but it’s been a good year.”