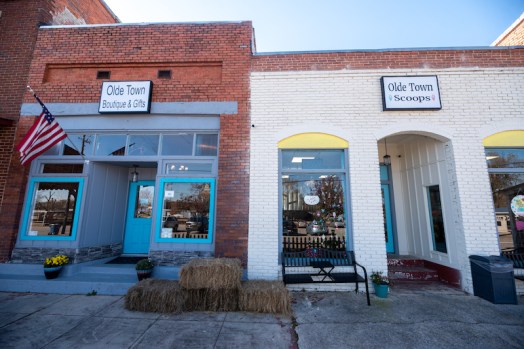 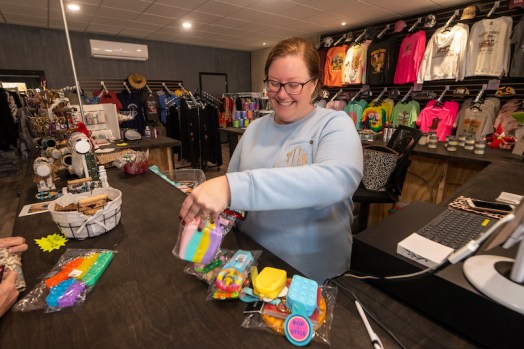 Tiffany Gaines in the new location of Olde Town Boutique.

Editor’s note: This article originally published in “Progress 2022: Centers of  Community.” Copies are available at our office, 1109 Seventh Street N. in Clanton.

Once a bustling town center, Old Town Jemison had lost much of its liveliness. Since initially constructed some 120 years ago, the town square has featured many store varieties through the generations, some of which include a barber shop, dry goods and grocery stores, hat shop, pharmacist, hotel, video rental, an embroidery store, antique and collectible glassware and ice cream shops. Jemison’s first jail and police station were also part of Old Town, as well as the train station, post office and a meeting place for the Independent Order of the Odd Fellows which was an organization whose stated purpose was to “visit the sick, relieve the distressed, bury the dead and educate the orphan.”

Over time, generations have passed, store fronts have sold and moved on to Highway 31, leaving Old Town to sit quietly and reminisce of yesteryear. However, in 2019, Johnathan and Tiffany Gaines of Jemison had the idea to open up a boutique in the former city center.

“I had been working for a medical gastro office and had the idea to open up a boutique to sell some of my vinyl projects,” Tiffany said. “We didn’t really have an exact location of where we wanted our store to be, but once we visited the store (now known as Olde Town Scoops), I knew that we had found the perfect place. There was so much stuff stacked up and so much work that needed to be  done, but I could still see that the old

character of the building was charming.”

Some of the coveted features that the couple fell in love with were the old bricks, big store-front windows and arched alcove doorway that once permitted shoppers to go from store to store without ever going outside.

“I saw that one of the original bricks in the wall was stamped 1906, the year it was made,” Tiffany said. “I loved the store-front windows that would allow me to decorate mannequins, and there is so much parking here!”

The couple purchased the store and another store that adjoined it. First opening Olde Town Boutique and Gifts, and later opening the Olde Town Scoops ice-cream shop next store.

As part of their entrepreneurial journey, they had to remodel and renovate the buildings.

“We had to clean and cover parts of the walls and ceiling to bring them up to date for the health department since people are eating here,” Tiffany said. “We also had to completely re-do the plumbing and bring the building up-to-date.”

After celebrating their one-year anniversary of the new businesses, the Gaines saw room for an expansion, purchasing two more spots in Old Town, bringing the number of their owned storefronts to four.

The original boutique location will now be extra seating for the ice-cream parlor and sandwich shop. The Gaines will also rent the seated space to the community for events such as a baby shower, birthday party or a small wedding reception.

“I am open to ideas that the community wants to use this extra space for,” Tiffany said. “We have thought about having a bingo night and asking local businesses if they want to donate prizes for bingo. It would also be a great space to have a painting party or host something different once a month. There isn’t anything for young people to do in this town, and we want to offer something. The possibilities are endless.”

The newest store front is located a few doors down, beside Old Town Eatery, and is the new home to Olde Town Boutique and Gifts. The Gaines updated the inside of the third store in a barnwood-style motif.

“We have updated it, but there are still many parts of the building that are reminiscent to years past,” Tiffany said. “Olde Town Boutique and Gifts was once a hotel, and the upstairs still has six fireplaces. We are working to restore the floor up there, and it will eventually be our office. There is also an old dumbwaiter in the back of the building, and we aren’t sure if we want to restore it or get rid of it right now. We are still working on what to do with it.”

The move doubled their square footage for Olde Town Boutique and Gifts which now allows them to double their merchandise, including a wide selection of vinyl shirts, accessories, men’s gifts, home decor and clothing.

The Gaines fourth store is an electrical company.

“My husband, Jonathan is an electrician, which has been a huge benefit and blessing to us in this journey of restoring these old buildings,” Tiffany said. “Gaines Electrical will be

The Gaines said that since initially starting the boutique and ice cream shop, they have felt welcomed and supported by the community and are grateful.

“We want to thank the community,” Tiffany said. “You see signs everywhere that say ‘Shop Local,’ and we are experiencing that first hand. We have individuals and families who come in once a week. We get to know them. We love and enjoy it. It is great to see that people are coming and bringing life back to Old Town instead of letting it sit and deteriorate.”

The Gaines say they have also had many people come in their stores and reminisce of yesteryear, share old photos and stories of Old Town Jemison and what the stores once were and they love it.