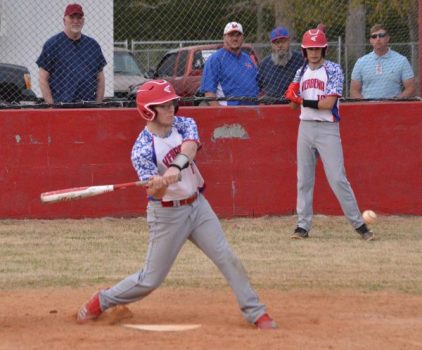 A Verbena batter looks a pitch into contact with Johnathan Marino on deck. (CAREY REEDER | ADVERTISER) 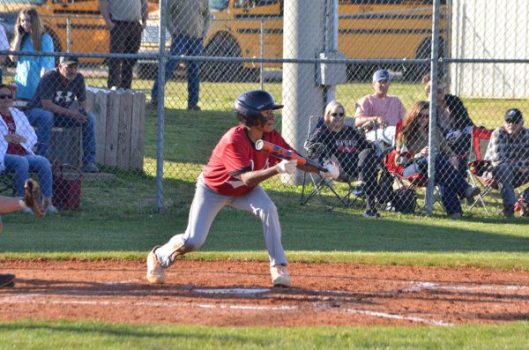 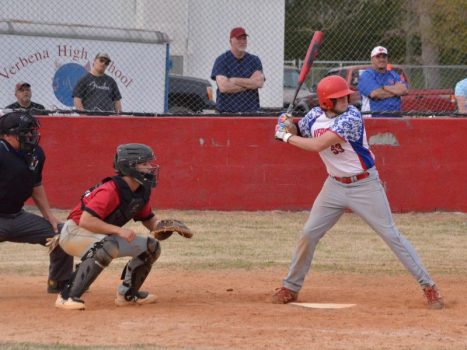 Maplesville High School won both of its Class 1A Area 6 games this week over Verbena High School. Maplesville won the first matchup on March 29 5-4 and followed that up on March 31 with a 12-2 win.

Maplesville led 5-1 in the bottom of the seventh inning in the first battle of the Red Devils. Cole Gray took the mound in relief of Bradlee Padgett who threw six and one-third innings.

With two runners on base, Verbena got to Gray with a triple to plate both runs. A wild pitch pushed the third run of the inning over to make it 5-4 Maplesville.

Gray then settled in to strike out the next two batters to end the game.

Looking forward to the second matchup of the week against Verbena, Little wanted to see more extended starts for his pitchers.

“Our pitchers need to step up and take care of business because we don’t have enough arms to rotate them in and out,” Little said. “We need guys to throw the whole game like Padgett did today, he did exactly what we asked him to do.”

Troy McMillian accepted the challenge in game two by going the full five innings in Maplesville 12-2 win on March 31.

The game sat tied at two in the bottom of the fourth inning. Brady Harrison walked to put runners at first and second base with no outs. Padgett laid down a perfect bunt and forced a throwing error at third base to score two runs. He subsequently scored on a wild pitch to make it 5-2.

Aidan Abbott dropped a single into right field to score the last Maplesville’s run of the inning.

“(McMillian) threw a heck of a game and did a great job on the mound for us,” Little said. “We played good defense behind him, but our offense was the key today.”

Verbena’s Johnathan Marino laced a double down the left field line to put two runners on with one out. McMillian responded by striking out the next two batters to hold Verbena at bay.

Maplesville poured it on in the bottom of the fifth inning. A Padgett double followed by a McMillian single scored two more runs to make it 8-2.

“I think they’ve realized the teams we played before spring break were tough teams, but it was for a purpose— to get us ready for area play,” Little said. “We fell short before spring break, but we were learning something each game.”

Maplesville added four more runs to close out the game. Although very young and a large portion of their players are playing their first season of varsity baseball, Maplesville is beginning to see the results show from their early season lesson learning.

“We’ve gotten to see good baseball these last two games,” Little said. “I hope they’ve taken it to heart and they’ve realized they can do it and give them a little confidence.”