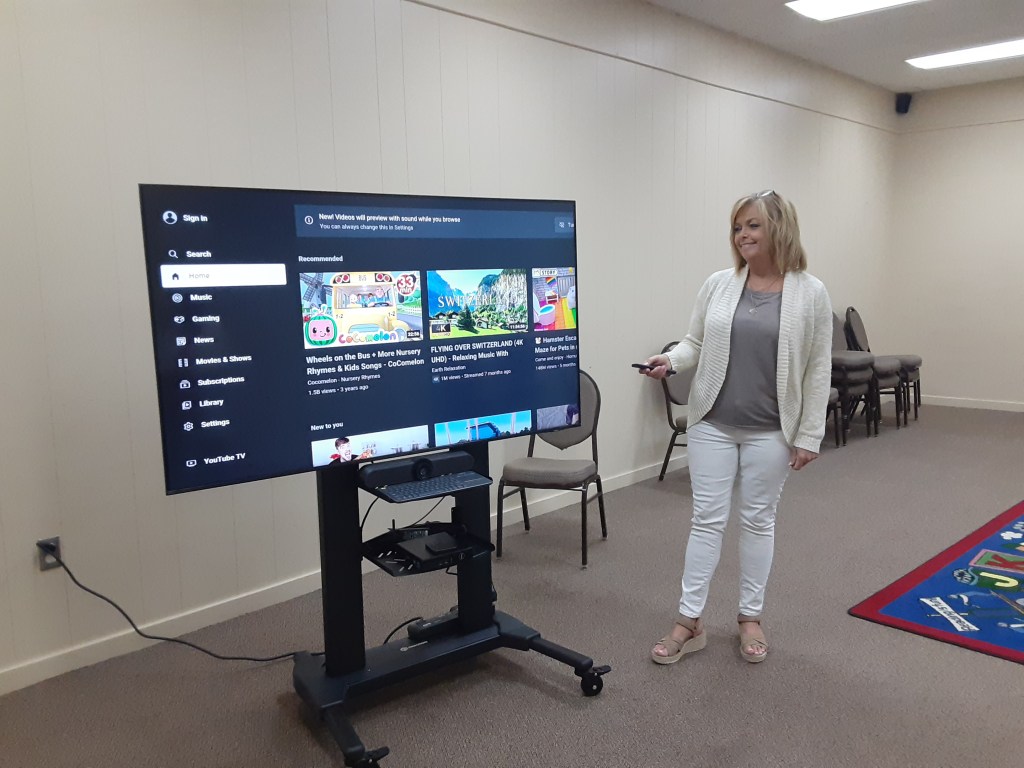 Renee Chambers demonstrates the new monitor that can be used to have meeting members join via Zoom. (JOYANNA LOVE | ADVERTISER)

The Chilton-Clanton Public Library has received funding for new technology.

Library director Darlene Brock said the library received a Library Science and Technology Act  grant for equipment to allow those using the conference room to have someone join via Zoom.

She expects that it will be available for use beginning in May.

Those wanting to use the equipment, which is a large monitor and a camera, need to mention that when they reserve the room.

“I think that it will benefit groups that meet here,” Brock said.

Children’s librarian Renee Chambers mentioned it would be nice for those that are not able to attend in person to be able attend meetings held there.

Each organization wanting to use the equipment will have to have a Zoom account already created.

A digital screen has been purchased and placed in the library lobby to promote community events and to serve as a fundraiser. Brock said businesses and organizations can purchase a spot for $25 a month. (No political ads will be accepted.)

The library has also received funding from the United Way of Central Alabama for iPads for the children’s area.

Laptops are available for adults to use in the library. Patrons can also print from their phone.

The library has also increased the number of wireless hotspots available for checkout. The devices can be checked out for two weeks.

Three of the devices were acquired through an Alabama Public Library Service grant, and the library purchased three others.

Brock said the devices have been popular.

The devices work the same way a mobile hotspot would work to allow internet to be accessed by other devices.

Another popular resource has been the library’s Libby app, which allows Chilton County residents to access books, audiobooks and magazines without setting foot in the library.

Chambers said many have enjoyed using it.