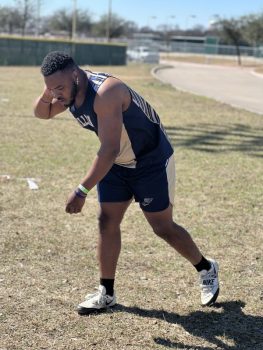 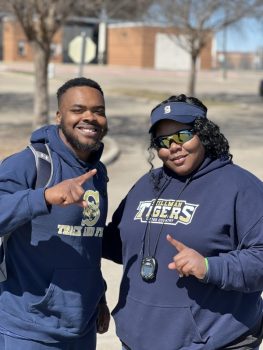 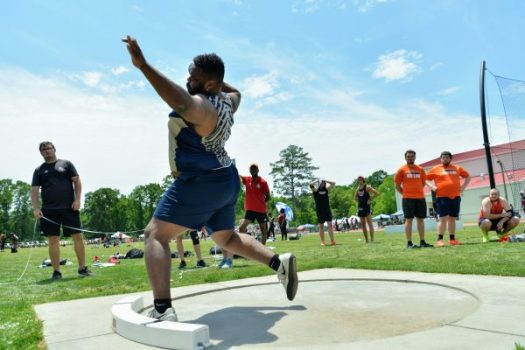 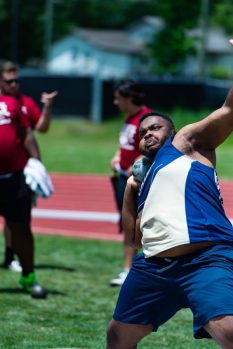 Willie Washington stood in the throwing circle at the 2022 Jet Relays at Beverly D. Humphrey Tiger Stadium in Lancaster, Texas on March 12 with one goal in mind— improving his craft.

The Isabella High School alum, now a thrower on the Stillman College men’s track and field team, took his wind up and launched the 16-pound ball.

The distance of 14.38 meters was read across the sound system.

“Going into the meet, I told him just to be patient, get across the ring,” Stillman track coach Ashley Curry said. “I knew when he threw it, it was good.”

The 14.38 meters was Washington’s personal best shotput throw of his college career and the sixth-best throw in Stillman program history.

Willie said after the throw “that he has so much more to give.”

Washington won the Jet Relays shotput portion out-throwing the runner-up by 0.77 meters. He improved by over a full meter from the first meet of the season on March 5 in Mississippi. Washington finished in sixth place with a 13.19-meter throw there and was the highest individual finisher for the Stillman men’s team.

Washington also posted his career best discus throw in the Mississippi meet with a 28.17-meter effort. That was four meters better than his starting distance in the season 2021.

The last two shotput top-10 finishes for Washington this season were the sixth and seventh of his career.

Going into the Jet Relays, Washington said his confidence was not the highest.

“It felt heavy (at the first meet), but I knew I was doing something wrong,” Washington said. “I fixed my technique and did well. When I throw I don’t think, so when I slow down and get myself together I do well. It’s all about confidence.”

Washington was named the Southern States Athletic Conference Men’s Outdoor Field Athlete of the Week on March 15 after winning the Jet Relays.

“He’s starting to see the fruits of his labor and see everything come together. With a lot of hard work and dedication, we could get there,” Curry said. “I told him to remember that feeling and keep working from there. I think this weekend gave him a little more motivation and confidence.”

Washington, although listed as a senior, has another year of NAIA eligibility after opting into his COVID-19 bonus year.

“It feels good to be that lone athlete or one person to get recognized,” Washington said. “All the hard work is paying off for sure.”

Curry has her sights set on helping Washington become the best thrower in the conference. Washington and Curry also want to keep improving and reach the 15.35-meter threshold. Any thrower with an effort of 15.35 or better will get eligible to qualify for the NAIA National Championship.

“I know he has the capabilities to hit that mark,” Curry said. “We’re just going to continue to what?”

Curry arrived at Stillman in 2019 with Washington already on campus. The track and field program is relatively new for Stillman, so athletes like Washington performing at their highest potential is important for a growing program.

“The team when I started was really small, but we’ve grown a lot,” Curry said. “We may be small in numbers, but we’re mighty. I love to tell them every time they step on the track to give it their all.”

Washington lived in Selma growing up but attended Isabella from kindergarten until graduating high school. He was a three-sport athlete playing football, basketball and track and field for the Mustangs. Washington played football under current head coach Tate Leonard.

After his junior year of basketball was complete, Washington wanted something to keep him busy, and he did not like baseball too much.

Then, he found shotput. Washington struggled his first season of throwing but earned a spot in the state playoffs his senior year.

When it came time to choose his next step, Stillman College was an easy choice for Washington. Many members of his family attended the university in Tuscaloosa and Washington wanted to continue that family legacy.

He is doing that by maintaining nearly a 4.0 GPA while excelling in the throwing circle for the Tigers.

“I love seeing him get that throw out there and see I’m capable,” Curry said. “I’ve been telling him over and over again that he can do it. He can go well over 50 feet, I just told him to trust me, trust yourself and trust the process. You’re the king of that ring, so go out there and do it.”

Washington wears two wristbands every day and also during every meet. The first, a purple band honoring the late basketball player Kobe Bryant. The second is an Omega Psi Phi band of the fraternity Washington recently joined.

“It was hard work getting into it,” Washington said. “I keep it in the back of my mind what I’m working hard for.”

Washington will continue to strive to be the best version of himself with the help of Curry’s guidance throughout the rest of the 2022 season, and the rest of his Stillman career.

“I don’t like mediocre, I always tell him to put his best foot forward both academically and athletically,” Curry said. “He’s a great example of an all-around student athlete who upholds the overall principles and mission of this institution and NAIA. He’s a champion of character all the way around.”