Jones collects another tournament for CCHS 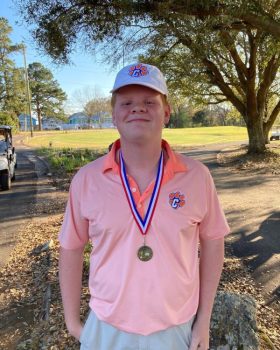 Only a freshman, Jones took down the MUSH Tournament in Oak Mountain on March 22 with a score of 146 through the two-day match to outlast 70 golfers from 12 different high schools.

Jones sat at even par through the first round and two strokes behind the leader with a 72. On day two, a consistent 74 from Jones was enough to take the tournament.

“As a freshman, to take down that tournament is really impressive,” CCHS coach Paul Dubose said.

Jones said he missed a chip to go under par in the first round, but was able to recover well into day two.

“I played pretty good,” Jones said. “I had a few minor mistakes, but I think I played good overall.”

Jones has been on a tear to start the year, and it began on March 7 at the Clanton Country Club when he posted a score of 39, the low score of the day.

He backed that performance up with a low medalist at the Wetumpka Invitational on March 10 with a score of 37 to win the six-team match.

“I practice about every day, and just try to be consistent,” Jones said. “Last year, my mental game was off, so this year when I have a bad hole I try to forget it and move on. It’s helped me be more consistent.

Jones took down CCHS’s March 14 match at the Timberline Golf Club in Calera with a 38 to earn low medalist.

“I approached it as the first tournament of being the number one,” Jones said. “I know I’ve done well in the matches I’ve played in so far. I was shooting for a top five but was able to get it in the end.”

Jones hopes to continue his hot streak into March 28 for the CCHS boys golf teams next match at the Clanton Country Club.