Area play on the horizon for county baseball teams 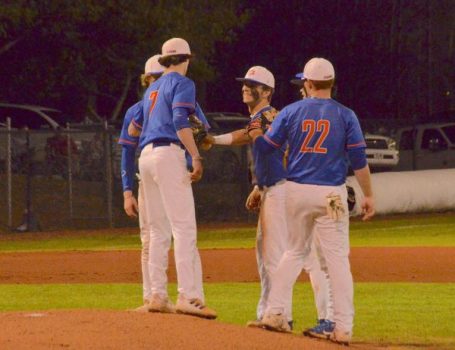 Senior Eian Headley talks with his pitcher and infield before the start of an inning. (CAREY REEDER | ADVERTISER) 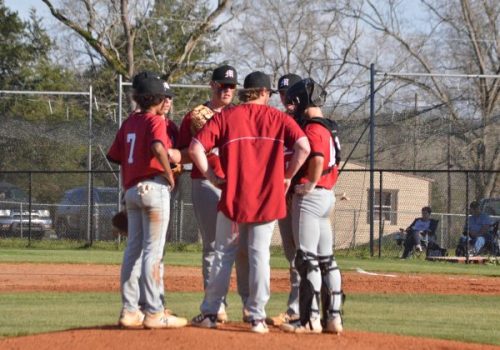 Since the start of the baseball season in mid-February, a majority of the area high school coaches were adamant about the “second season” for their teams. That second season is region play, and that season starts for four of the six county teams with their first game after spring break.

Area play is important for playoff purposes with the champions and the runners up in each region getting a sport in the state bracket. That does not mean the non-region schedules are a formality, but if a team hits its stride midseason around region play, they could parlay that into a chance at the state title.

Maplesville, whose first win of the season was over the Mustangs, has an opportunity to right their rough start in a big way in region play starting on March 29 against Verbena High School. The schools will face off again two days later on March 31.

Verbena has had its fair share of rough ground to start the season, but the two schools who represented the 1A Area 6 region last season in the state playoffs have everything to play for in front of them. Maplesville won the area in 2021.

Billingsley High School is also in the same area and has had a good start to the season holding two area wins over Loachapoka High School and Verbena.

Thorsby High School and Isabella High School share a portion of the 2A Area 6 and have seen each other once in the county tournament on March 10 with the Rebels escaping with a 1-0 win.

Both teams have had great starts to their seasons. Thorsby has a 3-0 record against Area 6 schools after thumping Marion by a combined 38-0 in a doubleheader on March 14. The Mustangs get their area play underway on March 28 hosting Greene County for a doubleheader.

“We know we have all of our area play in front of us,” Isabella coach Dustin Green said on March 17. “We’ve been a very good team all year, and we just need to continue that.”

Both Thorsby and Isabella represented the 2A Area 6 in the 2021 state playoffs with Thorsby winning the area. The two schools meeting again for their regular season series on April 4-5.

Chilton County High School has 19 days between its area games, and may welcome it after the roller coaster ride on March 17 in the Tigers 8-7 win over Pelham High School. The Tigers split the series with the Panthers and have two-game series against both Calera and Helena High Schools, starting on April 5 against Calera.

Helena won the area in 2021 with CCHS earning the runner-up spot in the playoffs.

After seeing all of these teams play earlier in the season, they all possess the talent and fortitude to make a run at their area championships. Who will be the players on those teams to help lead their school to the playoffs?

The high school diamonds in Chilton County are heating up in March.