Local recognized among Women Who Shape the State 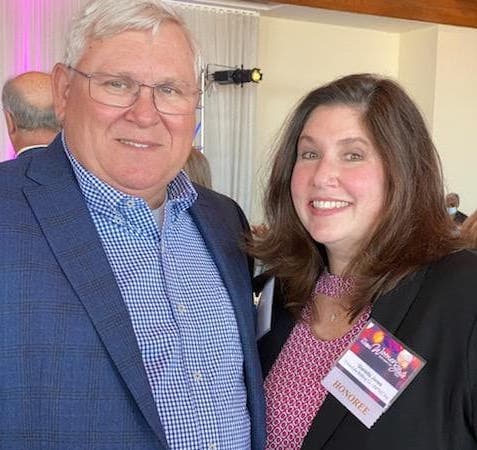 Gianetta Jones , left, was honored at the Women Who Shape the State luncheon. (CONTRIBUTED)

Since 1987, March has been celebrated as National Women’s History Month which honors the extraordinary achievements of American women.  “This is Alabama” and Coca-Cola United recently recognized and honored Clanton resident Gianetta Jones among “Women Who Shape the State.” The 2022 class of Women Who Shape the State honorees come from different professional fields, but all share one similar goal: Making their communities a better place to live.

Jones is employed with Coca-Cola United’s Birmingham office and has been with the company for 15 years presently serving as vice president and chief people officer of human resources.

The Coca-Cola Company, introduced in 1886, offered individuals the opportunity to purchase and own franchises. In 1902, Birmingham resident, Crawford Johnson Sr., purchased a franchise and established Coca-Cola United. Today, Coca-Cola United services Georgia, Louisiana, half of Mississippi, the majority of Alabama and the Florida panhandle. Jones provides support to all of the human resources offices in the mentioned locations.

“We are a family at Coca-Cola United,” said Jones. “It is a special place to work. It is high-touch and internalistic. We try to help our associates. When COVID began, our team started brainstorming ways that we could support our associates. Recently, with the rise in gas prices we have been discussing giving gas subsidy to help retain employees. We try to anticipate their needs and concerns.”

Twenty-six professionals were chosen across Alabama to be honored from over 300 applicants. The honor Jones received as Women Who Shape the State exemplifies intelligence, leadership and fearlessness.

“Being fearless as a leader, means all eyes are on you,” said Jones. “Be confident. People are watching how you will react. Do your homework. Know who you are presenting to and be bold in what you are asking for.”

Jones credits the strong female role models in her life, namely her grandmothers and her parents for equipping her to be a confident woman.

“I am humbled by this recognition,” said Jones. “This is a great example of when there is a job to do, do the best of your ability and don’t be surprised when someone notices.”

Gianetta enjoys spending time with her husband, Clint, who she also attributes to much of her success. She enjoys traveling, entertaining and playing cards with special family friend, Adred Lenior. She and Clint also enjoy spending time with their children, six grandchildren, five dogs and four cats.