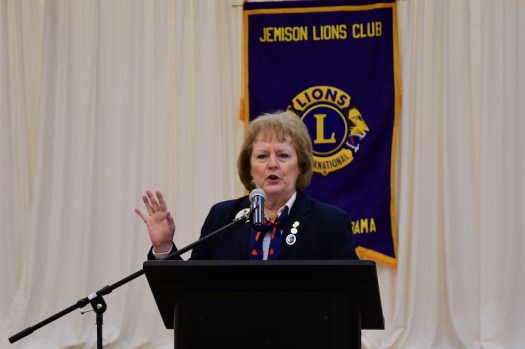 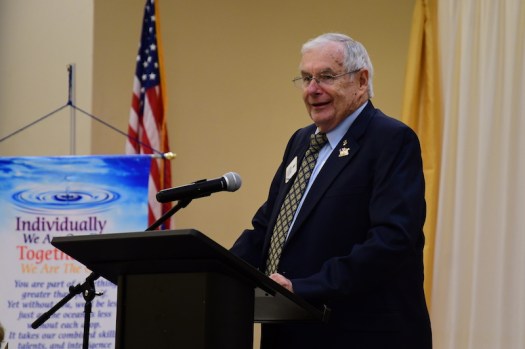 The Lions Clubs in Chilton County hosted fellow clubs from around the region for the District 34 B Convention at the Jemison Municipal Complex on March 19.

“You know the clubs in Chilton County are busy,” Lions Club District 34 B Governor Brenda Elliott said. “They do a lot of good for the county and even outside the county.”

Jemison Mayor Eddie Reed welcomed the visiting clubs and said he was proud to have all of the clubs meet in the city.

Updates on various Lions activities and projects were given, highlighting ways that clubs could better serve their communities.

Elliott shared her theme for the year for the district — “Individually we are one drop. Together we are the ocean, you are a part of something bigger than yourself … together we make a powerful difference.”

“Sometimes we get to the point — I don’t matter I’m just one,” Elliott said. “But, you are an important one.”

Lowell Bonds, past international director who attends the Jemison Lions Club, spoke about the grant the district had gotten for a disaster response trailer.

Elliott said it was one of the things that one does not want to have to use, but it is good to have because it will be needed.

Bonds said the trailer was purchased through a disaster preparedness grant from Lions International.

The trailer is stocked with things that may be needed in an emergency and can be taken to an area hit by a disaster and distribute the items. The trailer has basic needs items for victims of storms as well as equipment that could be used in cleanup and recovery efforts.

“It’s a gift,” Bonds said. “All it required of the district governors from all three districts was their signature and a copy of their checkbook and some minutes (from the meeting) where they accepted it.”

Three of these trailers are available in Alabama. It also has the Lions Club logo on it and can serve as a way to raise awareness for the organization.

“That trailer out there rolling up and down the highways is a rolling billboard, saying that the Lions are here, and that we do things in Alabama,” Elliott said.

He said the districts need to use this gift to its full potential. He mentioned partnering with volunteer fire departments as a location to offer items that might be needed to help storm victims.

Training opportunities for deploying the trailer and leadership training was highlighted during the event.