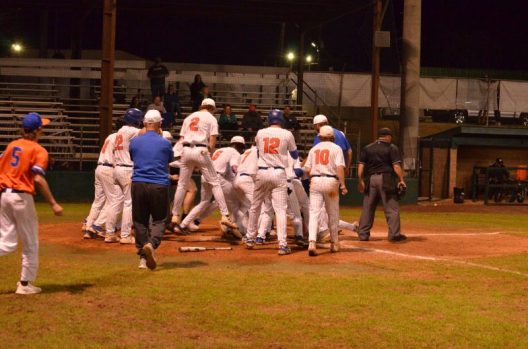 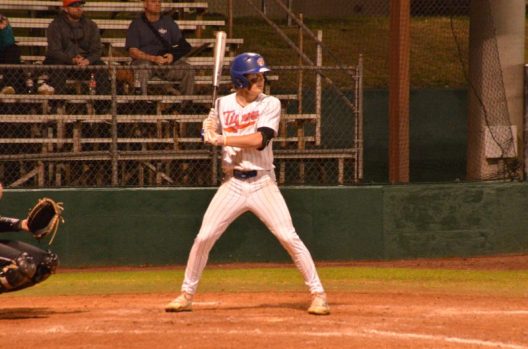 Tre Fulmer stands in the batter’s box during his game-winning at bat. (CAREY REEDER | ADVERTISER) 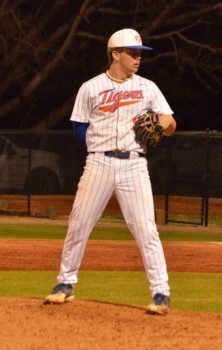 Eian Headley looks for signs from his catcher during the game. (CAREY REEDER | ADVERTISER)

With a 1-2 count, and runners on first and second base, Chilton County High School’s Tre Fulmer stood in the batter’s box awaiting his seventh pitch of the at bat.

The Tigers were down 7-5 going into the bottom of the seventh inning. They were down to their last out before Cannon Miller and Leighton Coppedge dropped a pair of singles into right field.

Then it was in Fulmer’s hands. The junior fouled off the first five pitches of the at bat before taking a ball on pitch six.

On that seventh pitch, Fulmer sent a towering ball to straight away center field over the Jack Hayes Field outfield wall for a three-run, walk-off home run to give the Tigers an 8-7 win.

Fulmer went 1-for-3 with four RBIs, a walk and two runs scored.

The junior is not known for his pop off the bat, but Fulmer did hit a massive home run on March 4 against Trinity Presbyterian School. When he gets a good barrel on one, he knows.

“I knew it was gone off the bat,” Fulmer said. “I never have been a power hitter so it feels awesome.”

CCHS dropped its first game against Pelham on March 16 on the road 5-1, and it was important for the Tigers to earn a split in game two.

Miller got CCHS on the board first singling in the first inning to plate Sam Smith to put the Tigers up 1-0. The next run was not scored until the top of the fourth inning when Pelham got one across on a wild pitch.

The Panthers applied more pressure in the top of the sixth inning scoring three runs to go up 4-1.

The Tigers responded immediately in the bottom half of the sixth inning. With two outs and the bases loaded, Fulmer and Cole Tignor earned back-to-back walks to plate two runs to cut the deficit to 4-3. Parker Willis sent a single to right field to score two more Tiger runs to put CCHS on top 5-4.

Willis went 1-for-2 with two RBIs and a walk.

Senior Eian Headley went the near full seven innings falling an out short. Headley gave up eight hits, five earned runs and struck out four batters. He added a hit at the plate to his totals as well.

“Everybody on the team was ready when their number was called to do whatever role we had,” Ellison said. “It’s wins like that that show you what a team is made of, and I think it’s safe to say our team is made of a lot.”

Pelham got three more in the top of the seventh inning, aided by two CCHS errors, to go up 7-5. That was until Fulmer said it was time to go home with his walk-off homer the next half inning.

“Games like that, you can’t make this stuff up,” Ellison said. “The guys believed in themselves and it showed tonight, they really battled.”

CCHS will have a few days off during spring break, then back to action on March 24 on the road at Holtville High School. The Tigers next area series are not until April.