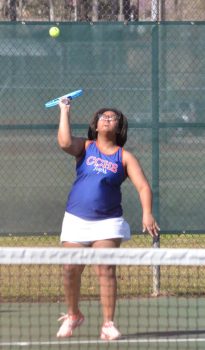 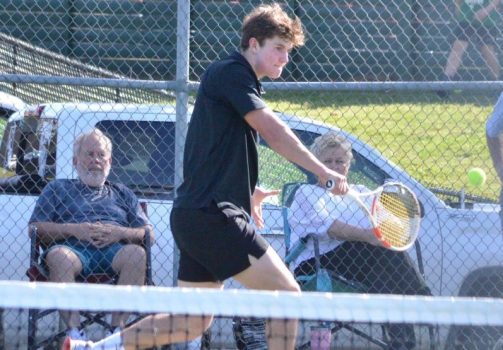 Helena swept the meet. However, the Huskies hold a lot more experience and exposure in their tennis program including having multiple junior high and high school teams. CCHS has just one high school team, but has made the first few steps towards establishing a tennis team or club at Clanton Middle School.

“We need to recruit on the junior high level, and start a club or tennis team,” CCHS coach David McCary said. “We need to do that in order to compete with the bigger, more experienced schools. That’s what they do, and we need to do the same to emulate their success.”

CCHS coach LeAnn Gregory and McCary are trying to develop their young team on the fly throughout the season.

The coaches are trying to balance getting the starters ready for meets while also helping the reserves improve their play.

CCHS has found success this season by defeating Prattville High School, Shelby County High School and Jemison High School. The Tigers are finding tough sledding against the biggest schools in their section, such as Helena.

Kenny Tilley has established himself as the Tigers number on boys player this season.

“Middle of the season he really came alive and became a solid number one,” McCary said.

The boys squad will lose three seniors next season, another reason McCary wants to establish that pipeline into the middle school.

The girls squad is led by the duo of Lydia Harton and Charlotte Blencowe who have made their way to the top of the girls roster. Harton and Blencowe also play doubles together and will have one more season together with both being juniors this year.

Caylene Bice and Landon Stevenson are two players McCary expects to take another step forward in the offseason into next season.

“We’ve got some young players, especially on the girls side,” McCary said. “With those four, we should be strong next year.”

CCHS will host its final meet of the season on March 29 against Jemison.