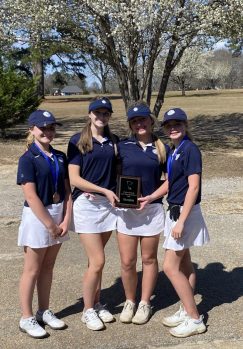 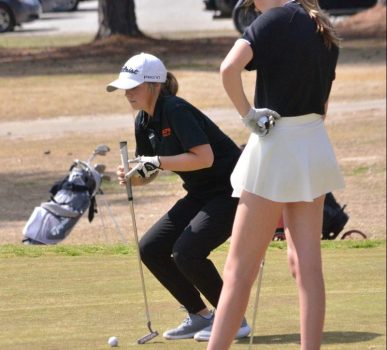 CCHS’s Ella Young lines up a putt during the tournament. (CAREY REEDER | ADVERTISER) 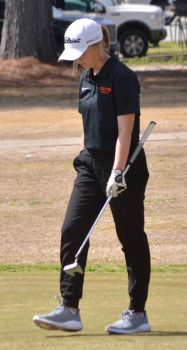 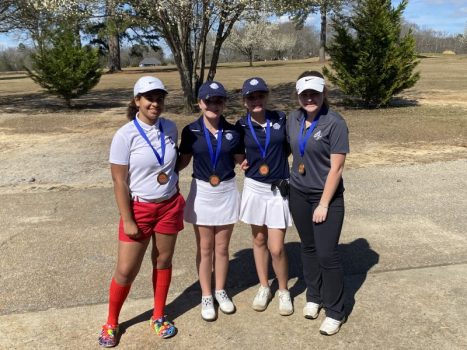 The all-tournament team after receiving their medals. (CAREY REEDER | ADVERTISER)

“I was very happy with how the tournament went today,” CCHS coach Paul Dubose said. “Doing something that’s never been done here is very special. It’s about giving the student athletes the opportunity to compete, to succeed, and it’s nice to give them that focus.”

The tournament was nine golfers from capacity and Dubose’s goal is full capacity tournament next season.

Cariann Beaty was the low medalist with a score of 92. Camille Beaty from Briarwood, Ansleigh Davis from Westminster High School and Juliana Wiley from Central joined Beaty on the all-tournament team.

Both CCHS golfers are freshman, and for Dubose, just getting the chance to get better is the most important thing right now for them.

“I knew they were going to be playing better golfers,” Dubose said. “It’s all about competing this time of year. I’m very happy for them, they’re learning to come into their own. We need to putt better, chip better and make sure we hit our fairways, but where we’re at right now I’m happy.”

CCHS golf has been active throughout this week beginning on March 14 with boys and girls teams playing at Timberline Golf Club in Calera. The Timberline course is where the sectional tournament will be played.

CCHS swept the low medalist’s with freshman Ethan Jones winning the boys and Young winning the girls. Stone posted the second-best girls score in the tournament.

The boys team was able to squeak in nine holes on March 15 in Prattville at the Prattville Invitational at Robert Trent Jones-Prattville Golf Course.

CCHS finished fifth out of 13 schools and was the highest finishing 6A school. Eighty golfers participated, and CCHS was led by Jones who finished tied for 13th. The Tigers number three golfer, sophomore Aiden Cleckler, finished tied for 21st.

CCHS has turned a lot of attention to its golfing program in recent years led by Debose and the student golfers who many participate in off season tours and tournaments to remain active. Dubose has focused more on drills in practices this season, mostly from 150 yards or closer.

All of this is trying to make sure CCHS is peaking and playing their best golf come April down the season stretch.

“We’re trying to transition what we do at practice into our tournaments,” Dubose said. “Being able to compete is huge, we can do it at practice all day long, but when you’re competing against girls from other schools it’s a lot more nerve racking.”

The CCHS boys will play on March 21-22 at the MUSH Tournament in Oak Mountain. The girls next tournament is the Northridge Lady Jags Invitational at Ol’ Colony Golf Course in Tuscaloosa on March 28.