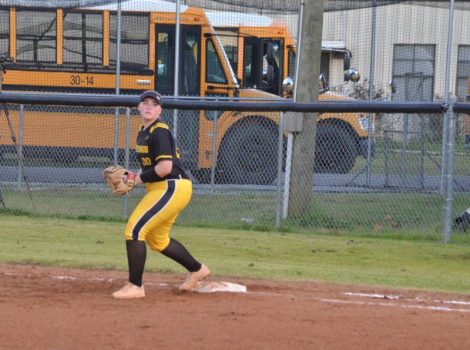 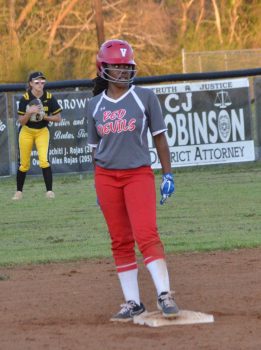 A Verbena base runner gets ready to run on second base. (CAREY REEDER | ADVERTISER)

Five area softball teams were in action in Chilton County in a packed March 17 under a full moon.

“The way she pitched, it was phenomenal for a seventh grader to do,” Isabella coach Kacie Adams said.

Amelia Fjeldstad went 4-for-4 with two doubles, two RBIs and scored two runs. Alliyah Patterson was the only other Mustang with multiple hits going 2-for-3 with one RBI and a run scored.

“Last night was a turning point for our team, everything was clicking together and the components were going the right way,” Adams said. “They grew in their softball IQ, they knew with the wet field conditions the infield would be slow. They played the small ball game when they needed to and did good things at the plate to get our runners in scoring position.”

The Panthers needed three runs in bottom of the sixth inning down 11-8. Bella Ruth Gilliland doubled to score two runs for Jemison followed by a Caley Branch double to tie the game at 11-11. Branch led Jemison with three hits along with Haileigh Greer. Each drove in two runs as well.

There was no score in the seventh or eighth innings, then Karlee Cummings drove in a Maplesville run with a groundout followed by Jaden McGee doubling to center to make it 13-11.

McGee led the Red Devils in hits with three, along with Jayla Nix. McGee, Cummings and Hannah Hollis each drove in two runs.

Thorsby High School redeemed an early season loss to Holtville in a big way with an 11-1 win. All memory of the Rebels opening day, 8-7 loss to Holtville was all but erased by Makinley Turner who threw five innings of three-hit ball and stacking up 13 strikeouts.

Lindsey Burnett was a force at the plate going 3-for-4 with two home runs, six RBIs and three runs scored. Brooklyn Reeser went 4-for-4, all singles, drove in two runs and scored three runs.