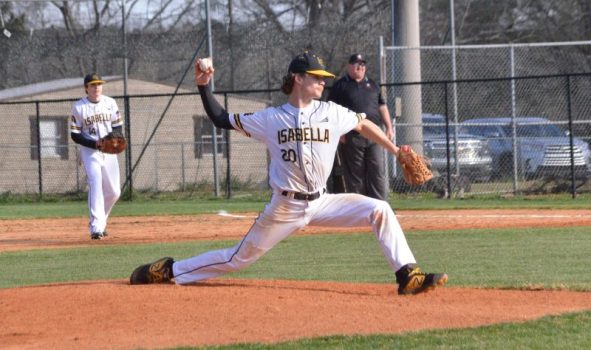 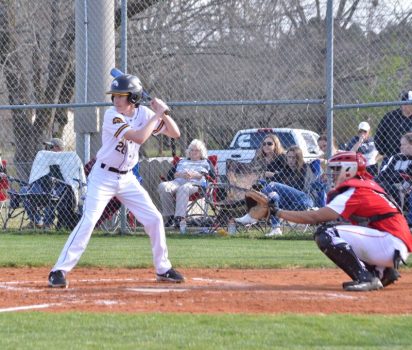 The Isabella High School Mustangs swept their doubleheader over Southside High School on March 14 at home. The Mustangs won 14-3 in game one and followed that up with a 21-10 thumping in game two.

Coming off their first loss of the season on March 10 against Thorsby in the county tournament, the Mustangs have had many people in the community express how much they enjoyed watching that game to Isabella coach Dustin Green. Green said parents and fans from other schools said “it was the best game of the tournament.”

In the doubleheader, the Mustangs showed no signs of deflation from the lose posting 11 runs in the top of the first inning in game one.

The first five runs were scored on wild pitches, then Austin Porter stroked a two-run double to make it 7-0. Colton Conway followed with his own two-run double for a 9-0 Isabella advantage. An error on the Southside shortstop and a bases loaded walk plated the final two runs of the inning.

“Sometimes you’ve got to push through the day, and you can’t change how you play based on who you are playing,” Green said. “There are kids that took their opportunity, and we saw some bright spots in doing that. It was a group effort in these wins today, just about everybody played some sort of role in winning both games.”

The lopsided affairs gave Green an opportunity to not only get some more of his players involved, but also rest his number one and two starters. Conway saw no time on the mound, and Tyler Mims started game one but threw just one and one-third innings.

It was Judah Day who took over for Tyler Mims in game one and allowed three hits, three run and two walks while striking out 10 batters over three and two-third innings.

“Today was a good opportunity to showcase the rest of our bullpen,” Green said. “We got some guys some innings, and we’re going to need them. There is going to come a time when they’re not going to be able to go a whole game, and it will take three or four pitchers to get through a game.”

Dawson Edwards drove in two runs and drew two walks in game one. Tyler Harmon got on base and scored a run.

The Southside errors were the downfall of the Panthers with five in game one and 10 in game two. However, Southside did start game two posting six runs through their first two innings at the plate.

Isabella, meanwhile, posted 16 runs of their own in its first two innings lead by Porter going 3-for-4 with a double, three runs and five RBI’s.

Zac Chapman and Tyler Mims each had two hits, and Braxton Mims, Tyler Harmon and Edwards each added a hit of their own.

Isabella will roll on to March 17 when the Mustangs face Maplesville High School.

“After your first lose, there is always the question of how do you respond,” Green said. “You can either go backwards or pick yourself off the floor and go forwards, and our guys today came out strong, and we’ve been playing very consistently throughout the whole year.”