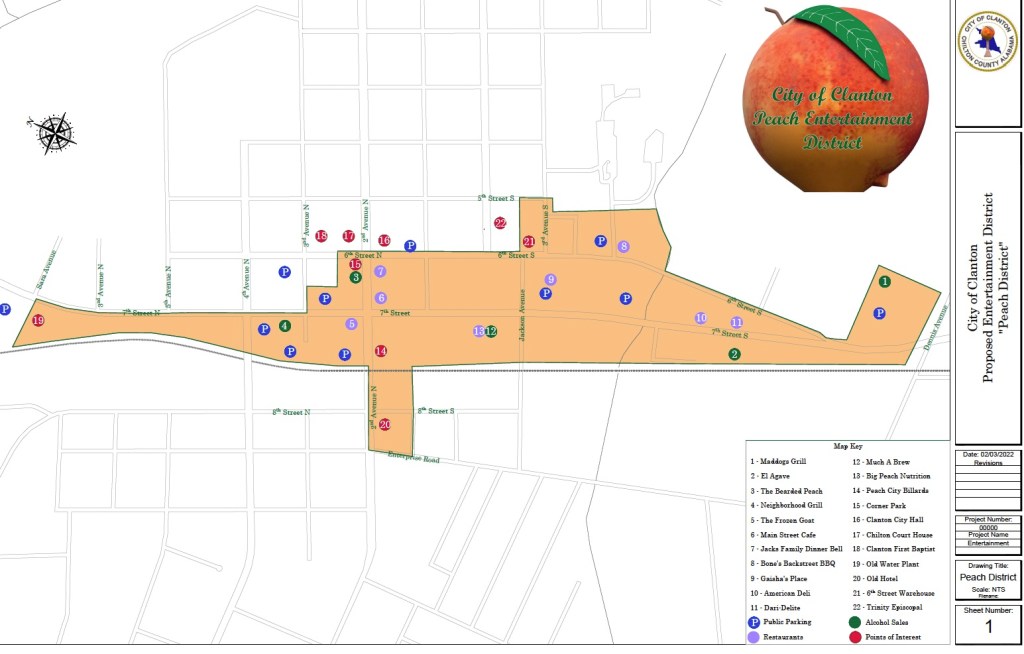 The establishment of the City of Clanton Peach Entertainment District was approved 4 to 2 at the March 14 Clanton City Council meeting. (CITY OF CLATNON | CONTRIBUTED)

The Clanton City Council gave final approval for the creation of a downtown arts and entertainment district during a meeting on March 14.

The plan is to have outdoor entertainment within the district and allow outdoor consumption of alcoholic beverages following specific guidelines Monday through Saturday 5 p.m. until midnight. The beverage would have to be in a specific cup with the city’s logo on it. Residents will still be prohibited from bringing open container alcoholic beverages from outside the district into it.

April 1 will be the opening day of the City of Clanton Peach Entertainment District.

In a statement previously released by the city, the district was described as “one of the most effective means of making downtown Clanton a destination for residents and tourists.”

The city has been in discussion with the Alabama Alcoholic Beverage Control Board to ensure that the ordinance has all of the needed components to comply with state law.

Limited open container alcohol consumption at outdoor events outside of the proposed district during specific events, such as Peach Jam, will also be possible. This would require prior approval from the mayor and securing the required special events license from the state Alcoholic Beverage Control Board. A specific boundary around the beer vendor would have to set up, and alcoholic drinks must be consumed within the boundary.

The first reading of the ordinance had been on Feb. 28.

Also during the meeting, Janice Hull of Hull & Russell presented a brief overview of the city’s audit stating that there were zero issues with the audit. The council later unanimously accepted the audit.